An 8-legged beast from Nova Scotia
Hi Bugman (Bugmen?)
I spent a few days camping in Kejimkujik National Park in Nova Scotia with a few of my friends, and opened my eyes one morning to this fellow’s silhouette above my face. Evidently he decided to clamber onto the top of the tent during the night for the heat, or the mosquitos trying to get in. Although spiders freak me right out, I respected that this one was not on me, and did not pose any major threat. Now, who is he? Until we were able to get close, I thought he was a dock spider, as we get those fairly commonly by lakes in Nova Scotia, but the coloring was very different. He resembles the small spiders we get in firewood piles, but he was approximately 6 centimeters across, much larger than any I’ve seen before, aside from dock spiders. As I approached to take a picture and usher him onto some firewood for deposit in the forest, he stood his ground and waved his two front legs at us…very intimidating! In any case, I’d love to know what sort he is, besides tenacious. He turned up the next morning too, and was just as reluctant to leave! Thanks!
Ryan Saunders 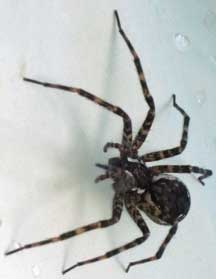 Hi Ryan,
We believe this is Dolomedes scriptus, one of the Fishing Spiders. Based on the size of the abdomen, we also believe he is a she. We are not certain what a Dock Spider is, but Fishing Spiders are often found near water and we suspect your Dock Spiders are probably the same species. BugGuide has many examples posted of Dolomedes scriptus, and there is variation in the coloration and markings.