Firefly, I think, in Florida
July 10, 2010
Hello again you helpful people! I believe you’d recently asked for photos of fireflies, and here’s one I took last month (had misfiled it and only just found it). When I was trying to ID it, I couldn’t find one that had all the same features. The antennae clearly have some feathering like pterotus, but all the images I found of those had solid red thoraxes. It looks a lot like lucidota, but the images of those I found have plain antennae and no red spot in the middle of the thorax, and no edge color to the wing cases (is that the right term?). What do you think? [Much thanks for the time and effort you expend on this marvelous website!]
Karen H.
Belleview, FL 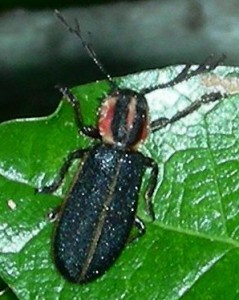 Hi Karen,
While it sure does look like a Firefly, we are not totally convinced it might not be something else, like a Soldier Beetle.  We are going to post your image and contact Eric Eaton to see if he has an opinion on the identity of your beetle.

Eric Eaton Responds:
July 12, 2010
You are correct, the insect is *not* a firefly.  It is a “checkered beetle,” Chariessa pilosa, and a firefly MIMIC.  Many beetles (and even other insects) masquerade as fireflies because fireflies are poisonous to many predators if they are eaten.
Eric