Female Stag Beetle, but what species???

Reddish brown stag beetle?
Location: Northern IL, US
July 10, 2011 9:48 pm
I was wondering if you could verify that this bug is a female reddish brown stag beetle. We just recently had a terrible storm that destroyed several trees in my friends backyard. Shortly after, I found her(I really don’t think its a him considering those small pincers) I read somewhere that reddish brown stag beetles tend to be around rotting wood and we’ve got a lot of that thanks to the fallen trees.  Despite those scary looking pincers she really is quite docile and i had no problem with her crawling on my arms.  My friend wanted to light a fire cracker on top of her but I smacked him 😀
Teenage boys sure are stupid sometimes :/ anyways, thank you!
p.s. this picture was taken in early July
Signature: Brie 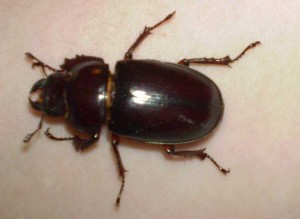