Subject: Fuzzy large black spider, New Mexico
Location: Rio rancho, NM
April 18, 2017 9:32 pm
I have several of these around my home and I just want to know what kind of spiders they are. I cannot find anything online and I refuse to spray. I just need to know if they are poisonous.
Signature: Rainah 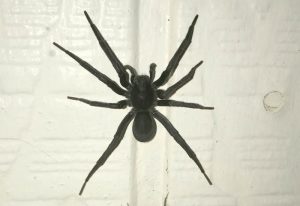 Dear Rainah,
Your images were quite dark, but we used some post-production image adjustment to lighten them enough to support our suspicion that this Crevice Weavers Spider is most likely a female Southern House Spider, Kulcania hibernalis, based on images posted to BugGuide.  This species exhibits extreme sexual dimorphism, meaning the two sexes look like different species.  According to BugGuide:  “Females are frequently mistaken for small tarantulas or trapdoor spiders. Males are often mistaken for recluse spiders (Loxosceles). This is a totally harmless species that builds “messy” webs emanating from crevices, often on the outside of homes.”  Though BugGuide data does not indicate any New Mexico sightings, they are found in nearby Texas and as far west as California, so a New Mexico sighting is quite probable.  This might also be the closely related Kukulcania arizonica, which is pictured on BugGuide and which is reported from New Mexico.  Of the entire genus, BugGuide states:  “These spiders create a tube-like retreat in cracks. This spider varies greatly in color from light brown to dark black. Females are generally grey to black while the males are tan.”  While we suspect a bite might occur through careless handling or accidental encounters, the House Spiders are not a threat to humans and they might help control other less desirable household intruders like cockroaches and scorpions. 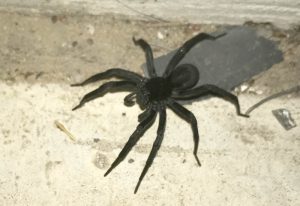 Ed. Note:  April 26, 2017
A comment from Cesar Crash has caused us to back off what we thought was an identification.  We are now unsure of the family classification.  There is a resemblance to the Common House Spider from the UK, and a search of the genus Tegenaria on BugGuide turned up some interesting information, especially regarding an unpictured species “T. chiricahuae – caves in southeastern Arizona and New Mexico (our only native Tegenaria).”  Needless to say, we are classifying this as a Spider at this time until we feel more confident regarding a family designation.