the park people had never seen this bug
Is it a bug? Maybe it’s a beetle. I wish I had put something next to it to help size it. It’s yellow and black back was larger than a quarter. It seemed to have a claw on its back near its head. One part of the “claw” was stationery and attached to its back and I think the other part that moved was on its head. It was large enough to surprise me on a path in Northern Virginia. I look forward to your feedback when you get the chance.
Angela 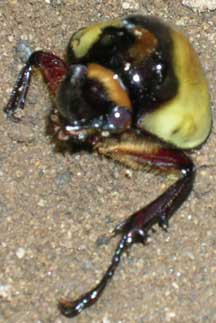 Hi Angela,
We believe this to be a female Hercules Beetle, Dynastes tityus, digging in the dirt, perhaps after metamorphosis. Grubs feed on rotting wood and the wood might have been buried. Or perhaps, she just fell victim to some predator that ate the abdomen and just left a decapitated head and two front legs. Nonetheless, the photo is very disturbing.

Update (06/25/2007)
Here is what Eric Eaton wrote in: “female Hercules beetle is most likely emerging, not digging, though the image looks suspicious to me. Looks like she has been decapitated behind the thoracic segments. The party photographing the beetle might have killed her, or a raven or owl or some other predator. These beetles are clumsy, but full of nutrious fat and protein, so many vertebrates prey on them. Eric”