Subject: Tortuguero Beetle
Location: Tortuguero
May 20, 2017 5:32 am
Hi Bugmen and Bugwomen,
I saw this big guy muscling in on the abejones de mayo phenomenon here in Tortuguero yesterday. Spotted on the dock next to the National Park entrance at around 6am. Can you let me know which beetle it is? It was about 12cm long.
Thanks guys!
Signature: Cabinas Tortuguero 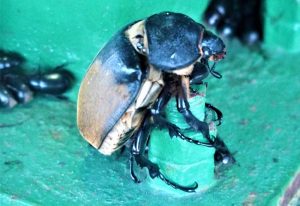 Dear Cabinas Tortuguero,
This magnificent Scarab Beetle, the Elephant Beetle, appears to be a female Megasoma elephas based on this image on Photographers Direct.  Male Elephant Beetles are even more impressive because of their massive horns, which you can see thanks to the BeetleSpace site.  According to YouTube:  “One of the largest beetles of the world endemic to western Mexico. Males reach lengths of 12 cm and more; females are slightly smaller and lack the prominent horns. Adults feed on rotting fruit and live only around 4 months. In the forests of Puerto Vallarta, the adults can be seen only in between October and February. Larvae eat decomposing wood and need full 3 years to attain optimum size. Although heavy, these beetles fly quite well.”