Subject: Bug id
Location: Norther Maine
July 27, 2014 11:00 am
Just wondering what this one is. I haven’t seen it before. Looks like a cross between a cricket and a grasshopper.
Signature: Nathan 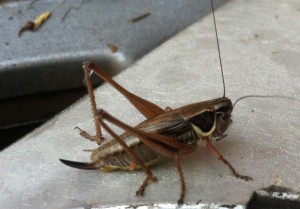 Dear Nathan,
This is an Eastern Shieldback Katydid in the genus Atlanticus, but we are not certain of the species.  Piotr Naskrecki, a Katydid expert, often assists us with species identifications when we are stumped, but he is currently collecting in Mozambique.  We will attempt to contact him, but we may not hear back for some time.  Meanwhile, you can compare your individual, which is a female based on her curved ovipositor, to the images posted to BugGuide.  According to BugGuide, they are “Omnivorous, eat other insects (living and dead), fruits, leaves, flowers of a variety of vegetation” and “Said to be strong biters.” 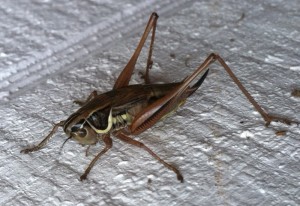 Correction Courtesy of Piotr Naskrecki
Hi Daniel,
Not an Atlanticus but an invasive species from Europe, Metrioptera roeselii (still very pretty, though.) It is common across the NE US.
Cheers,
Piotr

Thanks Piotr.  According to BugGuide:  “An introduced species from Europe first found in Montreal in 1953 (1).  Both long and short-winged forms exist. The long-winged forms can fly some distance and are more commonly collected here than in Europe.”