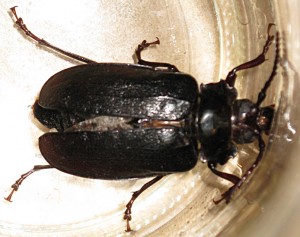 Hi Henry,
This is a female Broad Necked Root Borer, our feature Bug of the Month for July 2011.  According to BugGuide:  “Female much larger than male. The former is reported to be flightless, or nearly so. Males are attracted to lights.”  We wonder how this flightless or nearly flightless female found her way into your dirty laundry, though this specimen is not as robust as most of the females represented in photographs we have received.