On February 23, 2017 · Category: Feather Horned and Cedar Beetles Tagged With: WTB? Down Under · Add Comment

Subject: Feather-Horned Beetle – Rhipicera femorata
Location: Mount Gambier, South Australia
February 23, 2017 1:06 am
Found this beautiful little man today while out taking photos. Its a male Rhipicera femorata. They are uncommon and little is known about them, and i thought you and your readers might enjoy some nice photos 🙂
Taken on 23/02/2017, Mount Gambier, South Australia
Signature: – Liam 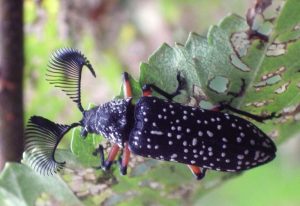 Dear Liam,
This is a very good morning for us.  Generally, the beginning of the year is not the busiest time for our site as winter envelops the northern hemisphere and most of our submissions are blurry images sent by desperate homemakers who find carpet beetles, stink bugs, bed bugs, cockroaches and other household intruders that they fear and loath.  Your submission is the third beautiful and wondrous posting for us today.  We really prefer posting images from people who appreciate the beauty of the lower beasts.  While Feather Horned Beetles are not new to our site, your images are especially lovely.  According to the Atlas of Living Australia:  “Adults may not feed, but fly readily in fine weather. During their short summer flight season, males greatly outnumber females; their flabellate antennae are presumably particularly sensitive to the female’s scent and help them to home in on her. The larvae are thought to be parasites of the nymphs of cicadas living in sandy soils.”  According to Featured Creature:  “The males differ from the females in that their anntenae are much larger and more pronounced. Those anntenae are unique due to the fact that they have more than 20 segments and arise from small knob-like prominences.” 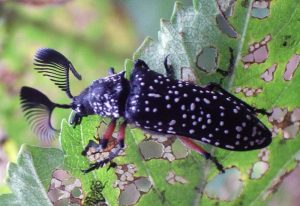