Fantasy Phasmid is a Hoax

Subject: What the hell is this?!
Location: Southern Wisconsin
December 13, 2012 1:42 pm
A friend of mine found this under his desk.
He describes it as ”about six inches long and faster than I can chase it with a shoe.”
Signature: Lucy 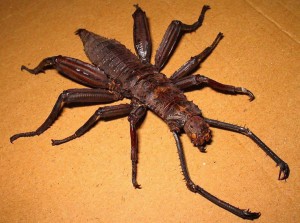 Dear Lucy,
We fear you have been taken in by a hoax perpetuated by your friend who we suspect is either a whiz at photoshop or who is interested in special effects.  The raw material for this concocted creature is a Phasmid or Stick Insect, but there are four additional legs that have been added through some software imaging program.  Insects only have three pairs of legs and this creature has five pairs of legs.  The Lord Howe Island Stick Insect pictured on the Australian Museum website is an example of what a typical large Stick Insect should look like.  The Giant Spiny Stick Insect picture on Insect Zoo is a closer match and it is described with the following colorful excerpt:  “Sci-fi makeup artists and costume designers must get their ideas from this thing. At least 6 inches long, this alien-like insect had the girth of a broomstick with sturdy antennae, bulging eyes and a variety of rubbery textures across its back. If anything like that ever appeared in my house, I’d most definitely have to check myself into an outpatient facility.”  The Australian Museum website also have photos of the Giant Spiny Stick Insect,  Eurycantha calcarata, which we believe is the inspiration for your friend’s hoax.  We would also like to point out that Phasmids are not generally describes as moving “faster than I can chase it.”  Their movements tend to be slow and plodding.

6 Responses to Fantasy Phasmid is a Hoax