Subject: Unknown bee/flry
Location: Near Prescott, Ontario on the St. Lawrence River
July 7, 2013 1:25 pm
On July 1st I noticed a insect flying around my flowers that I’ve never seen before. It looked like a honey bee but it had a wider abdomen and rather than stripes, it had yellow ”blocks” down each side of the abdomen. It was about the size of a bumblebee. It was hanging around the salvia plant but it didn’t act like a regular bee. It kept landing on leaves and just sitting there or it would land on a flower, briefly walk a few steps and then take off again. It didn’t seem to be collecting nectar like bees do. With so many invasive insects around, I was concerned. This salvia plant is next to my mulberry tree. So I grabbed my camera and took several pictures. Sometimes it would sit like this with it’s wings open but other times it would sit with it’s wings closed over it’s back just like a bee.
Signature: Joan 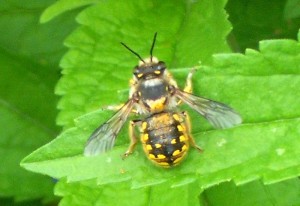 Hi Joan,
This is a non-native European Wool Carder Bee, Anthidium manicatum, and the jury is still out on if this is considered an invasive species or merely one that is not native, but does not significantly, negatively impact our New World ecosystems.  We will do additional research.  Meanwhile, BugGuide has some information.