Subject: Golden Yellow bug
Location: Cyprus, Kalo Chorio
April 22, 2017 7:18 am
Found this outside the offices near the flower bushes, trying to figure out what species this is, looks like some sort fuzzy little scarab but not sure what kind exactly.
Signature: Random Office worker 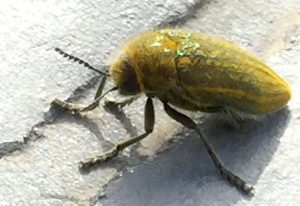 Dear Random Office Worker,
We believe we have correctly identified this lovely Jewel Beetle in the family Buprestidae as Julodis armeniaca cypria, a subspecies endemic to Cyprus, thanks to the Nature Wonders site where it states:  “Endemic subspecies of Cyprus. The nominal species J. a. armeniaca Marseul, 1864, can be found in Turkey and the Near East.”  It is also pictured on BioLib.  Though this is a new species to our site, we do have amazing images from South Africa of a relative in the same genus, the Brush Jewel Beetle. 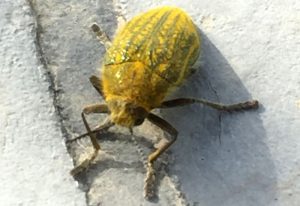