Subject: Caterpillar ID
Location: Daru , Sierra Leone
August 5, 2014 5:13 am
Hi Bugman
I think this is an Emperor Moth Caterpillar …can you confirm that for me>?
Signature: Don Thomson 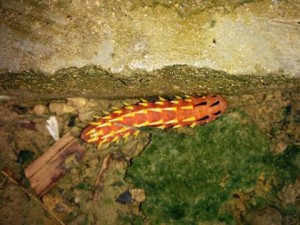 Hi Don,
First we apologize for not responding to your initial request.  We opened the attached file and knew we needed to do some research, and then we forgot to get back to it.  Emperor Moth Caterpillar is a somewhat generic name for caterpillars from the family Saturniidae, the Giant Silkmoths.  We did some research on the members only World’s Largest Saturniidae site, which breaks out sightings according to countries.  Interestingly, Sierra Leone and its neighbors Liberia and Guinea are not represented on the site.  We did find an image that matches your caterpillar and it is identified as a “Bunaea alcinoe larva (red form), Ghana” and we are satisfied with that.  That species is represented on our site under the common name Cabbage Emperor Moth Caterpillar, and we only have the typical black form.  The caterpillars are edible and the common name Emperor Moth is used for this species as well.  We are going to contact Bill Oehlke to see if he can verify that identification.  Do you have a higher resolution image?

Thanks Daniel
I don’t have a higher resolution image but will try find another one to photograph.
Any further info would be appreciated
Thanks and regards
Don Thomson

Bill Oehlke confirms identification
Yes, Daniel,
It appears to be B. alcinoe, the red form, but interestingly it has two sets
of black horns near head instead of the single row mentioned by Oberprieler.
I suspect alcinoe is also in Guinea and Liberia.
Please find out from photographer if I can have permission to post image. I
would also need photographer’s name.
Bill