bug identification please
We live north of Ft. Worth, TX and after all the rain, I am seeing these moths/butterflies? at the base of our Oak Trees. What is the white "goo" they are in a frenzy over? I’m guessing it is an egg mass. When I do a very close up, I think I see larvae.(among other trapped stuff). Could you help us identify them and tell us if they are good or bad for the trees. How do we get rid of them if we need to? Thank you,
Kathy 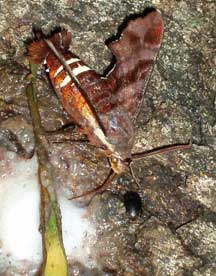 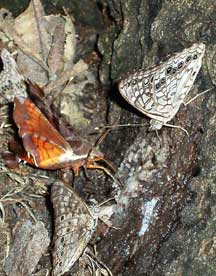 Hi Kathy,
The butterflies in your photos are some species of Emperor Butterfly, probably the Hackberry Emperor, Asterocampa celtis. There are at least four members of this genus that can be found in Texas, and they all look very similar, though someone more versed in butterfly identification can probably give you an exact species. The moth is a Sphinx Moth, the Nessus Sphinx, Amphion floridensis. The butterflies, moth and various fruit flies and beetles have been attracted to the white goo. Hackberry Emperors feed on tree sap, fluids from carrion and dung, and rotting fruit. Another possibility is that this could be some type of fungus. Whatever it is, and sap is a good possibility, it is very attractive to many types of insects. Because of the fruit flies, fermentation might be involved. We believe you might need a tree expert to get this answer. We were just about to give you a personal reply when we realized you enclosed additional images. The large image below shows a large group of Hackberry Emperors with two Questionmarks, Polygonia interrogationis, one with open orange wings displayed. The other Questionmark is in the upper right corner (we rotated your image) and the silvery Questionmark is visible on the lower wing. Questionmarks, and other Anglewing Butterflies, have similar feeding habits to the Emperors, with sap, rotting fruit, carrion and dung topping the list of delicacies. 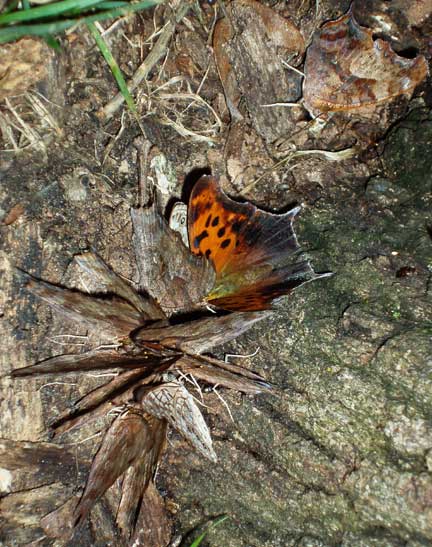 Daniel,
They would be feeding on fermenting tree sap.
Bill Oehlke

Update (07/06/2007) Appreciation and a correction…
Lisa and Daniel,
Thanks again for your fantastic site, which I visit every single day. Among the many great entries you just added (July 4?), I esp. love the proboscis sheath on the Rustic Sphinx…wow. The fermentation feeding frenzy photos are way cool too, and I think I have a correction in that the lowest photo seems to show a single Hackberry Emperor in a huddle of Question Marks, rather than the other way around. Keep it up! regards,
Dave Fallow
Madison, WI