Ed. Note:  Because our previous posting of Elm Seed Bugs has received so many recent comments, we have decided to make the Elm Seed Bug our Bug of the Month for July 2015 and to post it live a few days early.

Subject: Invaders!
Location: Salt Lake City Utah
June 27, 2015 12:13 pm
We have these little buggers that we seem to keep finding on the back end of our home near the windows. I found a nest of them underneath one of the blinds in our bedroom window. They dont appear to fly. They are about 1/4 inch long. What are they? Do they bite? How can we get rid of them? Thanks in advance…
Signature: -Loyal WTB fan for 5+ years 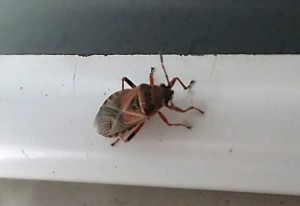 Dear Loyal WTB fan for 5+ years,
It appears that you have an Elm Seed Bug, Arocatus melanocephalus, infestation, a nonnative species first reported in North America in Idaho in 2012.  As you must know, we do not provide extermination information, though we are sometimes freer when the species is invasive like the Elm Seed Bug.  There are currently numerous comments from readers on the first Elm Seed Bug posting in our archives, and you may find some help there.  According to Gemtek:  “Identification: Elm seed bugs are typically ⅓ inch long and are dark brown in color, with an abdomen that is reddish colored. Like a boxelder bug, their wings fold to form a thin X shape. Aside from color differences, elm seed and boxelder bugs look nearly identical.  Diet, Habitat, Life Cycle, and Habits:  Once again, elm seed bugs are similar to boxelder bugs in all of these aspects. A key difference is that elm seed bugs are primarily found on elm trees. They feed on elm seeds, but will also feed on and live in other types of trees. They are most visible in warmer weather and will create an unpleasant odor if crushed.”  According to BugGuide:  “Invade homes during the summer to escape heat, and then stick around through the winter … One generation per year and adults overwinter. Doesn’t pose a threat to trees, but may show up indoors in huge swarms.” 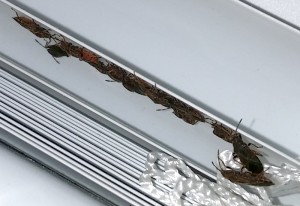 5 Responses to Bug of the Month July 2015: Elm Seed Bug Infestation in Utah