Subject: Beetle in Yosemite NP
Location: Near a creek @ about 6000’
August 3, 2012 3:19 pm
I want to determine if this is a native beetle or non-native. The location is southern Yosemite National Park at about 6000’ in a creek canyon.
The closest match I could come up with is Stictoleptura cordigera, but that would mean it is invasive. It doesn’t really look line the Elderberry longhorn beetle to me… color pattern is off.
Signature: PR 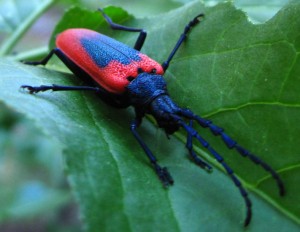 Dear PR,
This is an Elderberry Longhorn and it is a native species.  The beetles in the genus Desmocerus are collectively known as Elderberry Longhorns, and the species that truly owns the common name Elderberry Longhorn is Desmocerus palliatus, a species found in eastern North America according to BugGuide.  The other two species are west coast species and Desmocerus aureipennis has two subspecies and several color variations.  Your pictures are an exact match to this image of Desmocerus aureipennis aureipennis that is posted to BugGuide as well as to this image of the western Elderberry Longhorn from our archives that does not have a black patch on the elytra.  It seems according to the images on BugGuide, that the female of the species has the black patches, though that is not stated.  We believe this is a rare species.  This is a very beautiful beetle and your photographs are a wonderful addition to our archives. 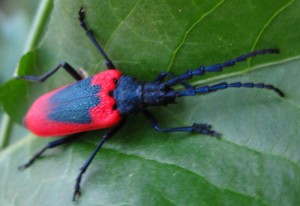 Great!
I’m glad to have helped and glad to know more about this amazing beetle!
Could you please credit the pic to Patrick Roe.
Thanks!

Update:  August 6, 2012
Hi there Daniel-
I’ve had two conflicting answers asa to the ID on this beetle.  I would like to bring this to your attention in case there was some error on bugguide.net.  I should mention I am a ranger in Yosemite and after posing the question to our Wildlife department, I received a response stating it was actually a female Elderberry Longhorn Beetle which is endangered.  “The black spot on the elytra (wing covers of beetles) identify it as a female Valley Elderberry Longhorn Beetle.”  Is their an identifying mark that would help me distinguish between the two species?  I want to make sure this photo is not being mis-identified.
Thanks!
Patrick Roe

Hi Patrick,
We are a bit confused with this email.  You did not indicate which two species you got conflicting answers on and where the conflict originated.  Here at What’s That Bug?, we do not have any scientific background, so we always defer to real experts.  We deduced the information on the wing patches based on the images posted to BugGuide.  Where did your quote come from?  What species or subspecies is the Valley Elderberry Longhorn Beetle? since none of the species and subspecies on BugGuide have common names except the general Elderberry Longhorn for the entire genus.

Hi there – Sorry about that!
Here is the picture I sent you and is posted on your site currently.  2012/08/03/elderberry-longhorn-2/
The response I got from the same picture via the Wildlife division here in the park is that it was a Valley Elderberry Longhorn.  I’m just not sure what to think now.  They were surprised to see I found it at 6000′, when the Valley Elderberry Longhorn’s highest known elevation was 3000′ previously.  I’m wondering if they misidentified it or if the bugguide.net site is incorrect….  What is the elevation range of Desmocerus aureipennis aureipennis?
Patrick

Hi Daniel –
After further discussion – Wildlife division here concurs that it is the Desmocerus aureipennis aureipennis.  Thanks for helping me figure this out!!
Patrick

Thanks for the update Patrick.  It is nice to know we are all in agreement now.  We want to reiterate that this is a positively gorgeous beetle.