found this bug.
Dear bug man,
I found this bug on a lamp shade in my living room. I moved it over to a table and got these great pictures of it before i put it in a bag and let it go, outside. I would like to know what kind of bug it is. Is it a type of beetle? A type of boxelder bug? please help!! Sincerely,
bug lover in Missouri 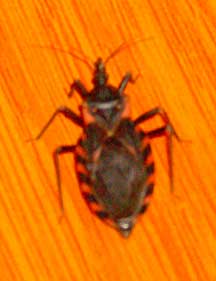 Dear Bug Lover,
This is an Eastern Blood Sucking ConeNose Bug, Triatoma sanguisuga. Their normal food consists of the blood of small mammals, like wood rats, but they will bite humans. As in your case, they will invade homes. According to BugGuide: “Bite causes severe allergic reaction in many humans. Bite and defecation into bite can transmit Chagas disease, caused by Trypanosoma cruzi , a protozoan. The most notorious vector is T. infestans, found in South America. The North American species are not normally thought to transmit the disease, though they can carry the parasite. (The North American species do not normally defecate at the site of the bite, which is what actually transmits the parasite.” Chagas Disease is a serious problem in the tropics. Though the liklihood of catching the disease from a North American species appears unlikely, you should nonetheless use extreme caution when handling one of the ConeNose Bugs.