Not a Rhinocerous Beetle?!
Hi there — I’m in south central Texas, and had the privilege of meeting this giant beetle! She looks like a June Bug, but way too big. As you can see, she doesn’t have the horned head, just a little round one, so I’m stumped! Any ideas?
Oh, and just for fun, here’s a shot of a red wasp trying its best to get this GIGANTIC dead spider into an eave of the house. I watched this wasp for at least an hour, during which time she dropped the spider at least twice and drug it back up the wall about 15 feet, all the way from the ground! Not a great shot, but I filmed a bit of this also, if you’re interested I can send the AVI file. I love bugs! Thanks for your great website.
Debbie 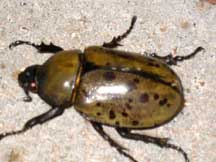 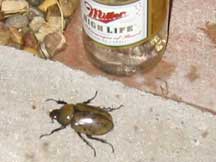 Hi Debbie,
The females of the horned scarabs, are with the horns lacking, as in your specimen of a Dynastes tityus, sometimes called the Eastern Hercules Beetle, and sometimes called a Unicorn Beetle. Nice use of scale.

Scarab, but not Christmas Beetle, from Mexico