Subject: Jewel Beetle?
Location: North of Portugal
April 18, 2013 1:35 am
Hello Mr Bugman. I’ve found this little bug while walking around a mountain in the North of Portugal.
Can you help me telling me if this is a jewel scarab and if it is a rare one?
Thank you! 🙂
Signature: Ana 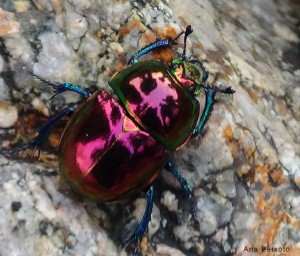 Dear Ana,
This is certainly a Scarab Beetle, and we believe it is one of the Dung Beetles revered by the ancient Egyptians and memorialized in their jewelry, art and heiroglyphics.  We have never seen a Dung Beetle with such spectacular coloration and we have not had any luck finding any matching images on the internet.  Here is what we did find.  Though we are certain it is far from comprehensive, the Scarabaeidae Europe site on FlickR has nothing that even looks remotely similar.  A search for the term Jewel Scarabs brought us to the Daily Croissant blog and a photo of a collection with a note it came from a February 2001 National Geographic Magazine article which refers to Central American beetles, so we can with some certainty speculate that your beetle is not one of the Jewel Scarabs from the article.  Encyclopaedia Britannica states:  “Scarab beetles are one of the most popular families with insect collectors because of the large size and beautifully coloured, hard, highly polished forewings of many species.”  We cannot believe we are having such a difficult time identifying such a gorgeous beetle.  We have requested assistance from Eric Eaton and perhaps one of our readers will be able to supply us with a comment, identification or correction.

Hello Daniel! Thank you! Ill send you a video that I captured. 🙂 It is really beautiful! Never thought I would like an insect so much. 😀

Eric Eaton Responds
Daniel:
Yes, it is a type of “earth-boring dung beetle,” family Geotrupidae.  Looks like Trypocopris vernalis, or something very similar.  I thought it was a Geotrupes sp., but that genus has apparently been split.  Lots of species in Europe, Russia, not so many here in the U.S.
Nice find.
Eric

Update
Thanks to comments from Dave and Jacob H., we now know that this is an Earth Boring Scarab Beetle in the family Geotrupidae, and the species is Trypocopris pyraneaus coruscans, with a matching photo on FlickR.  Even though this is not a Dung Beetle as we originally thought, BugGuide notes of the family that:  “These beetles spend most of their lives in burrows one to four feet down, often under dung or carrion” and “Larvae feed on dung or carrion. Adults feed on dung or fungi, or do not feed at all.”

Karl also provides the same identification
Hi Daniel and Ana:
It looks like an Earth-boring Dung Beetle (Geotrupidae) in the genus Trypocopris (=Geotrupes), probably T. pyrenaeus.  There are a number of subspecies and the distribution is Mediterranean Europe, particularly Portugal to Italy. Regards Karl.

Ana writes:  Exactly on the same spot I saw mine ahah 🙂 thank you!

Green Scarab Beetle from India is structurally coloured according to Wikipedia