Drawing of a Robber Fly, we presume

Large Stinging Insect
Location: Inside a DSW Shoe Store, Durham, NC, USA
August 5, 2011 11:02 pm
Hello, I saw this bug in a DSW shoe store and was wondering what it was. I don’t have a picture of it, but I tried to draw it. I know it looks bad but I’ll try to describe it. It was probably about 1.5 to 2 inches long, and maybe a bit less than half an inch wide. It had large black eyes, a nose like thing in between, and a slightly furry dark green/brown head. The wings were clear and narrow, and reached about to the ed of the bug, although not past the stinger, which was large, about one centimeter. The abdomen was narrow. That’s the best I can describe it. Sorry I can’t give a picture.
Thanks a lot,
-Emma 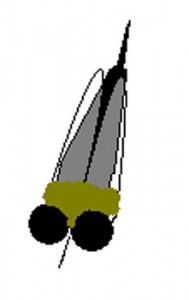 Did it actually sting you or someone you know of?

No, I had just never seen anything like it before. But I look through some of the pictures on your website, and I think that it might be a robber fly.
Thanks!
-Emme

That was our first guess, however we needed to verify that there was just the perceived threat of a sting versus an actual sting.  Robber Flies do not sting, but many people mistake the ovipositor of a female for a stinger and Robber Flies are frequently mistaken for wasps.

Robber Fly from the Congo