Male Pondhawk of some type?
Location: Raleigh Municipal Rose Garden, NC
June 27, 2011 2:23 pm
Greetings! My husband took this extreme closeup of what looks to be a male Eastern Pondhawk, except that the ’back’ is black. Is it a different version of a Pondhawk maybe? It was taken June 26, 2011 at the Rose Garden in Raleigh NC – there is a small goldfish pond with native plants where it probably lives & breeds.
Love your site! Take care…
Signature: looks but does not touch 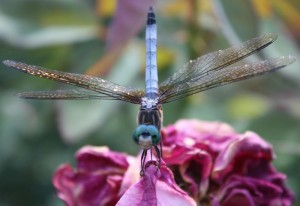 Blue Dasher or Not??

We sometimes have a difficult time correctly identifying Dragonflies.  We cannot say for certain that it is an Eastern Pondhawk based on the variations presented on BugGuide.  Perhaps one of our readers will be able to confirm the identity of this beautiful Dragonfly.

Correction: Blue Dasher
June 30, 2011 11:38 am
I am by no means an expert, but I suspect the male dragonfly whose id you’re unsure about is a male Blue Dasher. The light-colored face, darker thorax (possibly with stripes that can’t be seen from this angle), and the smoky coloration on the wings distinguish it. I believe the obelisking posture is very common among Blue Dashers as well (though many dragonflies do it).
http://bugguide.net/node/view/10606
This photo from Bugguide looks like a good match.
Signature: Susan B.

Thanks Susan,
We agree that the Blue Dasher, Pachydiplax longipennis, seems like a much likelier identification.