lobster/butterfly?
Location: Redmond, WA
June 26, 2011 1:21 pm
Hey, I found this flying creature at work and was really curious as to what it is. It looks like a lobster crossed with a butterfly.
Signature: Joe 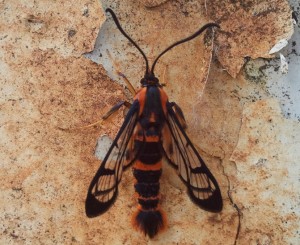 Hi Joe,
We could have easily given you a general family name of Sesiidae, the Clearwing Wasp Moths, without any research.  These Clearwings are wasp mimics, and the larvae are borers.  There are numerous members in this family, and many are very poorly represented with photographs of living specimens.  Pinned specimens from collections are often quite difficult to compare visually with living moths as the colors seem so much duller in museum specimens.  We scoured the pages of BugGuide, eliminating possibility after possibility, until we stumbled upon the Douglas Fir Pitch Moth, Synanthedon novaroensis, which is represented on BugGuide by a single mounted specimen from Alaska.  Bold Systems Taxonomy supplied additional images of pinned specimens from museums, and it was not until we searched the Moth Photographers Group website that we found a photo of a living specimen that satisfied us that we had properly identified your moth.  We also located this technical paper on the Douglas Fir Pitch Moth. 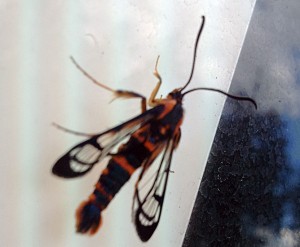