You can often see a lot of springtails when winter comes to an end and the snow begins to thaw. But do springtails die in the winter, or are they just hiding under the snow? Let’s find out.

Springtails are one of the most common pests that you can find in all types of climates. You can find them in hot weather as well as during freezing winters.

Springtails have been found in the freezing temperatures of the arctic and in the deepest caves of the world in Georgia’s Krubera-Voronja cave system. They are one of the hardiest species on the planet.

Here are a few things to know for people who deal with springtail infestations or someone trying to cultivate them! 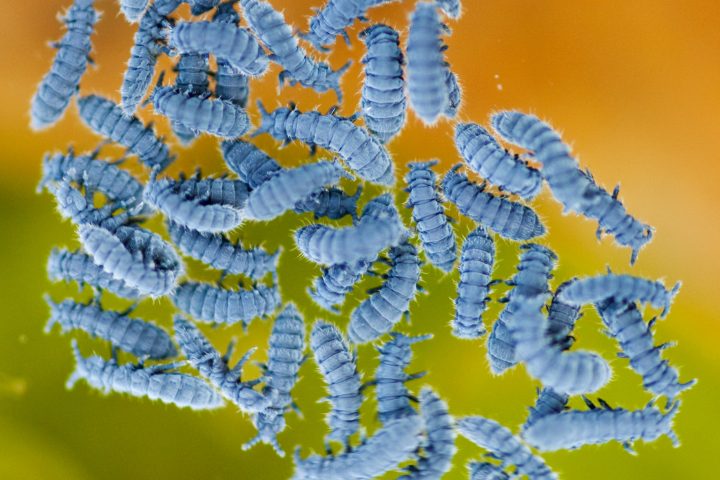 Do Springtails Survive in the Winter?

Collembola, more commonly known as Springtails, are insects that you can find in dark and damp places. Most springtails found in common indoor infestations can survive all year round as long as they have moist conditions favorable to their growth.

While the most favorable temperature for these arthropods is 65 to 85F, they can survive much more extreme weather. Studies have shown that the range of temperatures a species of springtails can survive depends on which area you find them in.

One species of springtail is also known as the snow flea (scientifically known as Hypogastrura nivicola). These springtails can survive extremely cold weather.

This species is easy to observe against the snow since they are colored black. They use the water in the ice to absorb the moisture they need to survive.

Like all springtails, they can also jump a distance much larger than their own length, giving them the appearance of fleas (hence the name snow fleas).

Despite the name, these creatures are not harmful and do not bite humans. They are highly active during winter and feed on leaf litter and other organic debris.

Are Springtails Only Active in the Winter?

Springtails can survive in any weather; it really depends on which species you are talking about.

If there is a springtail infestation in your house, it can occur during any weather. If you have potted plants or leaky pipes at home, it is an ideal environment for these pests to infest your home.

Species of Springtails That Can Survive Extreme Cold

Some species of springtails have evolved to adapt to extreme cold and freezing temperatures.

Hypogastrura viatica and Protaphorura macfadyeni are arctic species of springtails. They produce an anti-freeze protein that helps them survive the extremely low temperatures in the arctic region.

Another arctic springtail species by the name of Megaphorura arctica exhibits a biochemical mechanism called cryoprotective dehydration. This is a rare mechanism that helps them survive extremely cold temperatures.

In this process, these creatures lose water through evaporation automatically when exposed to below-zero temperatures. This helps them avoid getting frozen over.

Springtails don’t hibernate. They just let themselves get frozen over, and then when the temperature is normal again, they spring back to life as though nothing had happened!

At what temperature do springtails die?

How do you permanently get rid of springtails?

The best way to get rid of springtails is to eliminate their food source. You can do this by removing moisture inside the house and sealing up any cracks or crevices where they may be able to access food. Professional pest control companies can help with eliminating springtails in households.

Do springtails come back every year?

Springtails survive all year; they don’t need to come back. They can survive most temperatures as long as there is food and moisture for them.

They just sit in the soil and emerge when the temperatures start to warm up in the spring. Snow fleas emerge towards the end of winter when the snow starts to thaw.

Springtails are harmless but unique creatures that have adapted to many different types of temperatures. Be it an area of damp soil or ice, they have found ways to survive that we can observe and learn from. If you are cultivating them, take your time to understand these creatures. Thank you for reading! 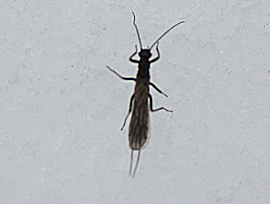 Ed. Note: February 28, 2010
Selecting the Bug of the Month each month is always a careful decision, and we like to try to select a recent submission that is timely in its appearance.  Insects that appear while there is still snow on the ground are unusual, but not at all rare.  This Snowfly is a creature that may be encountered by a sizable portion of our readership in the coming month.

Snow bugs?
February 24, 2010
Sorry to bug you all again (pun not intended, I assure you!)
But today at the river getting some photos of the snow, I saw these black things scurrying across the top. On a closer look, I noticed they were some kind of flying insect. Some were hitching a ride on another (or mating, not sure). I was careful not to step on any of them. (I hope I didn’t!). I’m sorry the photos aren’t great, but I don’t have the right lens for that. To be honest, they looked like miniature Dobson flies! Some were about almost an inch long. They were only at the river. What are these little guys?
Thanks a bunch, Terra
River, Massachusetts

Hi Terra,
Despite the snow, many insects are active during the winter months.  In the winter we frequently get images like yours of Snowflies, a group of Winter Stoneflies in the family Capniidae.  Though we do not refrain from posting photos that our readership takes during the summer months when the short cold days of winter allow people kept people indoors to work on the computer more, we much prefer timely postings like yours.  According to BugGuide Snowfly:  “nymphs live beneath rocks and gravel on the bottom of streams and rivers adults are often seen on snow, or resting on concrete bridges over streams” which explains your sighting near the water in the snow.  We wish you had provided an image of a mating pair for our Bug Love section.  One of your images contains a tiny Springtail in the genus Hypogastrura, and the species that are found on the snow are known as  Snow Fleas.  You may read more about these in our archive as well as on BugGuide. 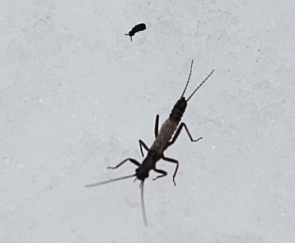 Wow! Thank you so much for the fast reply! I’m quite interested to hear more about these guys- they’re quite cute!
I’ll have to have a read on them, thank you!
(And sorry for the quality of the images- it was dark out!)

Ed. Note: After posting this letter and photos, a second photo of a Snowfly resulted in a request from the Xerces Society to use the image in an Endangered Species Act petition .  Read about that here. 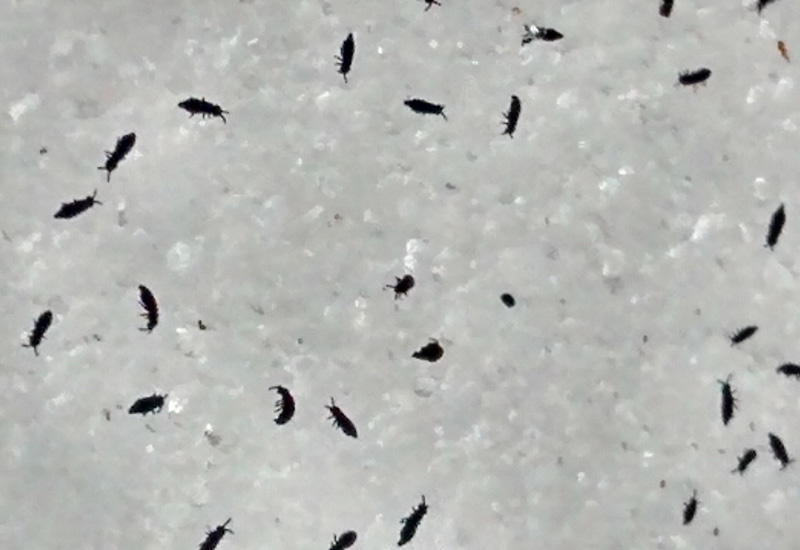 Subject: Millions of snow bugs!
Location: Eastern Ontario,
January 4, 2016 7:17 am
Saw thousands, maybe millions of little black specks in the snow around trees generally, and they are actually tiny bugs. They seem to be falling from the sky, but more likely the trees. What the heck are they?
Signature: Jon Paul

Dear Jon Paul,
We are very thrilled to be able to post your documentation of cold tolerant Springtails commonly called Snow Fleas.  Springtails are benign creatures that can become a nuisance if they are too plentiful, but they pose no threat to people, pets, dwellings or plants.  There are very few creatures that are active during winter weather with below freezing temperatures, but Snow Fleas are not deterred by either snow or cold.

Letter 3 – Snow Fleas in Canada: Springtails adapted to living in the snow!!! 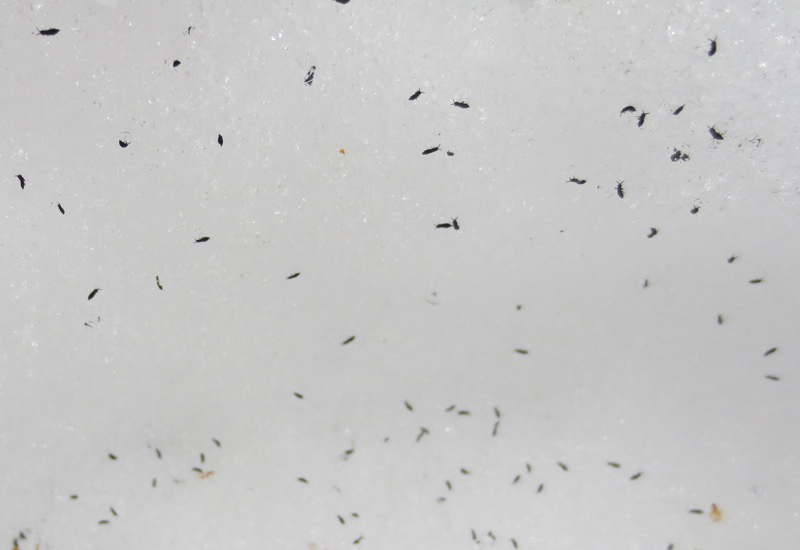 Subject: Found on snow !!
Location: Shea Lake, Quebec, Canada
March 23, 2014 10:26 am
Hello.. I was at my cottage ( I’ll put a google map link at the bottom ). The temperature was about +2 celsius. While walking in on a path we had made the day before, I notices what I thought was dust or soot from out wood burning fireplace, all alone the surface of the snow. I was more concentrated on the path, especially in the foot depressions left in the snow from walking on it. Then I noticed that the “soot” was moving !! Then I realizes I was looking at a bug of some sort. They were jumping like fleas !! I have video also. The first pictures shows the bugs up close and the second pictures shows the bugs next to the tire of my vehicle.
Any help will be appreciated.
Signature: sg.

Hi sg,
These Springtails are commonly called Snow Fleas because they are so small and because, as you observed, they jump.  They are not related to true Fleas, and they are benign creatures.  Snow Fleas often congregate in the sun while there is still snow on the ground.  They feed on lichens and when conditions are favorable, they can get quite plentiful. 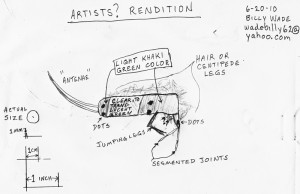 Hi Billy,
We get the biggest thrill out of some letters, and your letter is one of those.  We actually believe this is not a No-See-Um, but a Springtail.  You can compare your drawing to a No-See-Um image at the Great Salt Lake Marina website , and to this drawing of a Springtail by Gina Mikel commissioned by the Minnesota Department of Natural Resources.  We believe you may agree that you drew a Springtail which is thought to be the most common arthropod on the planet.  Tom Pelletier of the Curious Nature website writes:  “It has been estimated that there are as many as 3 trillion springtails in a single acre of temperate forest.”
P.S.  If we do a 2010 Calendar, we would like to use your image and letter.

“Billy Wade and the Springtails” – Live, One Night Only!
July 5, 2010
Dear Daniel,
I’m thrilled you’re thrilled! Yes; you may use my comments, letters, drawings, and pictures,
in any manner you see fit. And I’ll be watching and waiting for you to put that calendar out.
I think the “WTB” website is the greatest, and have told darn near everyone in Houston to
check it out! When I looked up springtails on WTB, I found, on page three, a picture from
Suzanne, posted: 09 October 2005, that is the spitting image of the critter that I drew up.
I compared the attached pictures. And?… I  HAVE  SPRINGTAILS! I can feel them hitting
my legs right now under my desk! Thank you, Tom Pelletier, for that “golden nugget” of
information, “..estimates of, as many as 3 trillion springtails per acre of temperate forest.”
Are you kidding me? The Houston, Texas area commonly has: 90 degree + temperatures,
90% + chance of rain, 90% + humidity, and, 90 + (thousand?) acres of temperate forests.
Multiplying numbers that big makes me feel very insignificant and…itchy!
Bug Update:
Since visiting WTB.com, I haven’t swatted, stomped, or squashed any of the bugs
that are now on or in: Tape, jars, lids, shot glasses, bags, caps, cups, plates, bowls,
counters, tables, desks, and, in the freezer! I’m hooked! My girlfriend HATES it, and
won’t eat here anymore! I should get her something nice. Maybe a calendar….
“New Bugger”
Billy Wade

3 thoughts on “Do Springtails Die In The Winter?”