Beetles are a source of many troubles in pantries and kitchens. But can they also cause harm to you directly? For example, do soldier beetles bite? Let’s find out.

Pollinators are great for the flowers in your garden as they help carry plant pollen and spread it far and wide.

But do you know that frequent visits from pollinators like bees can even damage the precious flowers in your garden?

Yes, it is true: bees can damage your flowers.

But there are some pollinators that cause absolutely no harm to your flowers. One such species is the soldier beetle. In this article, we will learn more about them and their behavior.

Soldier beetles are active flying insects that show an average growth of 0.5 inches and have yellow to tannish or dark brown-colored bodies.

These insects look similar to bees and wasps and are often spotted roaming or mating around flowers.

You will be interested to know that these insects are somewhat related to fireflies, but they don’t glow in the dark.

If you look closely, you will notice that the adult beetles have black-colored heads and wing covers that partially cover the body.

The soldier beetle larvae are also black in color, and they look a little like alligators. These larvae show an average growth of 0.75 inches in length.

The family of soldier beetles is divided into five categories, and these species are scattered throughout the world.

Asia, Central America, North America, South America, and Oceania are some of the regions where you can find these beetles.

Mentioned below are the five species of soldier beetles:

Soldier beetles are harmless to humans as they do not bite or attack. These small beetles feed on pollen and nectar.

In fact, due to this habit of theirs, they can be considered good pollinators. Adding to that, they cause no harm or damage to plants or flower beds while feeding as well.

Solider beetles are not harmful to humans. They are not aggressive, and they usually lie down to play dead when they sense danger.

Also, their colorful bodies signal to predators that they are not good in taste, which is why they are not attacked much.

At times they can be mistaken for a wasp or a bee, but they are not the same and will not sting you.

However, you must note that these insects secrete a defensive liquid that makes them appear unappealing to the prey.

Are They Harmful or Beneficial?

As mentioned throughout the article, adult soldier beetles are not harmful to humans; these beetles fall in the category of beneficial insects due to their great pollinating abilities.

Since they mostly rely on pollens and nectar to complete their diet, they regularly fall from one another throughout their lifetime. Also they mate around flowers as well.

The beetle larva is also important as it actively consumes the aphids that pose a threat to the valuable plants in your garden.

Due to these qualities, gardeners often create suitable conditions for these beetles to come and live in their gardens.

Soldier beetles have four major stages in their life cycle: eggs, larvae, pupae, and adults. They show complete metamorphosis, unlike many other insects.

The cycle starts when the female beetles lay their insect eggs in the topsoil—these eggs hatch in about a week.

Once the larvae come out, they live for 1-3 years before starting the pupation process. These larvae spend most of their time under loose bark and debris.

This process occurs in a cell built underground. The adult usually starts emerging in late July, and at times these beetles can have two generations in a year.

Are beetles poisonous if they bite you?

Usually, beetle bites are not poisonous to humans, but there is a chance of the bite triggering an allergic reaction in the body.
Some beetle bites can be highly painful and can cause problems like redness, swelling, irritation, and more.

Why are soldier beetles in my house?

You will usually find soldier beetles in your house during the winter when they search for warm spots to survive the cold.
Also, since they are highly attracted by flowers, having fresh flowers inside your house for decoration can lure these beetles in search of pollen and nectar.

How do I get rid of the soldier beetle?

Since soldier beetles are harmless and do not bite, there is no need to take any drastic measures to remove them from your garden.
Moreover, these insects cause no damage to the plants and flowers that they feed on. Just ignore these insects for a while, and they will be gone.

How do I get rid of the soldier beetle?

No soldier beetles are not harmful as they do not sting and bite. Also, these insects are not aggressive and non-poisonous.
Soldier beetles are considered beneficial as they are great pollinators, and they help to get rid of aphids and other soft-bodied insects.

Soldier beetles are a great addition to your garden as they increase pollination and remove unwanted pests like aphids.

Due to their bold appearance, people might consider them dangerous, but that is completely wrong. These insects are totally harmless.

We hope the article was informative. Thank you for reading it.

Soldier Beetles are often confused for other pests and insects that destroy crops.

Our readers have made this mistake several times in the past. Here are a few times this has happened in the past, and our reader’s reaction to know that this is not a harmful insect! 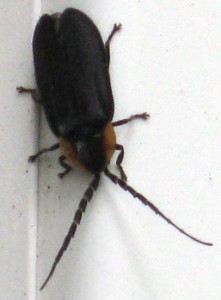 Firefly impostor
June 13, 2009
A few weeks ago I noticed many insects that look very similar to fireflies. The body is black and head has red/orange markings. They seemed to appear all on the same day and now we have hundreds around the house. We have never noticed them (at least in this quantity) before. Any idea?
Bugged Out
Philadelphia suburbs

Dear Bugged Out,
We are trying to answer some older mail we didn’t open in the past month.  This is a species of Soldier Beetle, Rhaxonycha carolinus.  BugGuide has some additional information on the species.

Correction
Tuesday, 14 July, 2009
I don’t know, this looks more like Lucidota atra, a diurnal species with reduced light organs, but a true firefly.  Have a look: http://bugguide.net/node/view/5361
clickbeetle 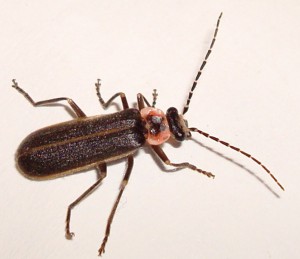 black bug reminds me of a lightening bug with no light
May 27, 2010
I have recently seen these black bugs in my home. it only started after it warmed up, which was later than expected here in michigan. i have 2 small children and am concerned if they were to get bitten.
email
Michigan, Mid

Dear email,
This is some species of Soldier Beetle in the family Cantharidae, but we have not had much luck determining the exact species based on the images posted to BugGuide.    According to BugGuide:  “Adults eat nectar, pollen and in some cases other insects, particularly aphids.  Larvae are generally carnivorous and feed on small soft-bodied insects.“ They will not harm your children. 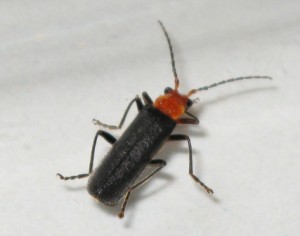 What bug is this?
Location: California, United States of America
April 20, 2011 1:54 am
Hello, I really hope this is not a termite! We have a bunch of them outside our home by the light at night. We live in California and it is currently spring time here.
Signature: Jared Peters 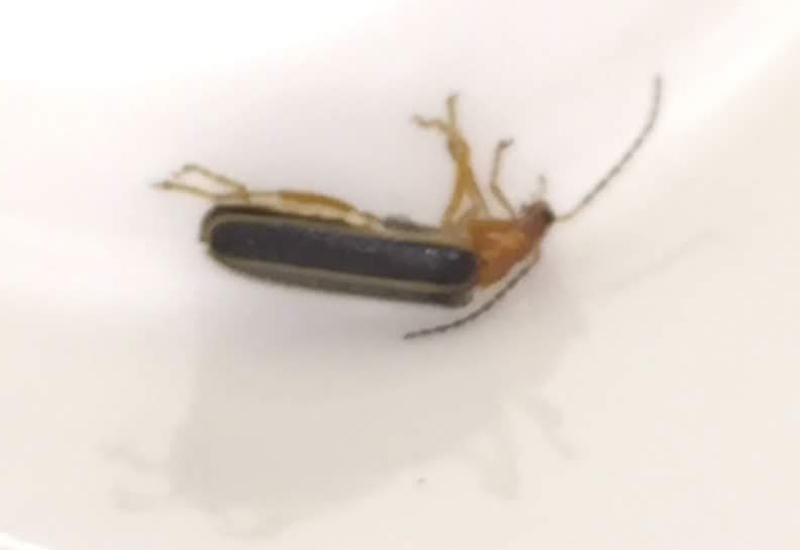 Subject: Bug bites my toddler
Location: Mooringsport, louisiana
April 6, 2016 4:09 am
This bug bit my one and half year old last night at 1 in the mornin then we found it dead on the counter this morning. Can you tell me what it is?
Signature: Nervous mom

Dear Nervous mom,
This is a predatory Soldier Beetle in the family Cantharidae, and it resembles images of Podabrus brunnicollis posted to BugGuide.  Soldier Beetles are beneficial and they are not dangerous.  Your request brings up several questions in our mind.  How do you know this individual bit your toddler?  What caused it to appear mysteriously dead on the counter?

My toddler had red bites on him after this bug was on him and was screaming. No other bug was on or neR him. We have no idea why he died or how, i assume he found some of the poison our bug guy sprays monthly.
Stephanie A