Wasps are indeed a scary sight and are notorious for their intensely painful stings. But do all species sting? Do great black wasps sting, for instance? Let’s figure it out.

Infamous for their painful stings, wasps are naturally quite scary. If you find a new species of wasp buzzing around in your garden, it’s important to find out if it’s dangerous.

If you have seen a rather giant-looking black-colored wasp in your garden, you might be wondering whether it can sting you.

Well, while this is the great black wasp, and yes, its does sting. Thankfully, you aren’t very likely to get stung by it. Let’s figure out if you need to get rid of great black wasps from your garden and if there might be a reason why you would want to keep them. 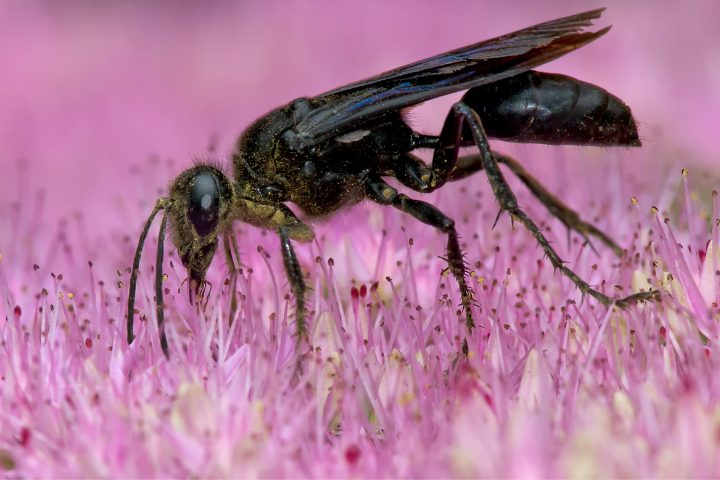 They are quite large, much bigger than other similar wasps. The adult wasps of this species range from 0.8 to 1.1 inches in length, and the females can be as large as 1.5 inches.

The matte black body of this wasp has a satiny touch to it. Despite its smoky black color, its wings are iridescent with blue color and remain folded along its back.

The area between the abdomen and the thorax has a narrow constriction (thread waist). This wasp features long, spiny legs and large, sickle-shaped mandibles.

All in all, the great black wasp can look quite scary, and we’re not surprised you rushed to check out what you are dealing with! So let’s come directly to why you are on this page.

Yes, these wasps sting. However, only a female can sting you; the males don’t have stingers.

Their sting is quite painful and can lead to swelling, and it can take several days to recuperate. Thankfully, the chances of getting stung by one of them are low.

This is because these wasps are solitary; they don’t live in groups. Unlike social wasps, they do not have a colony to defend and are, therefore, less aggressive.

However, a female wasp would still sting you if you get too close to its nest. 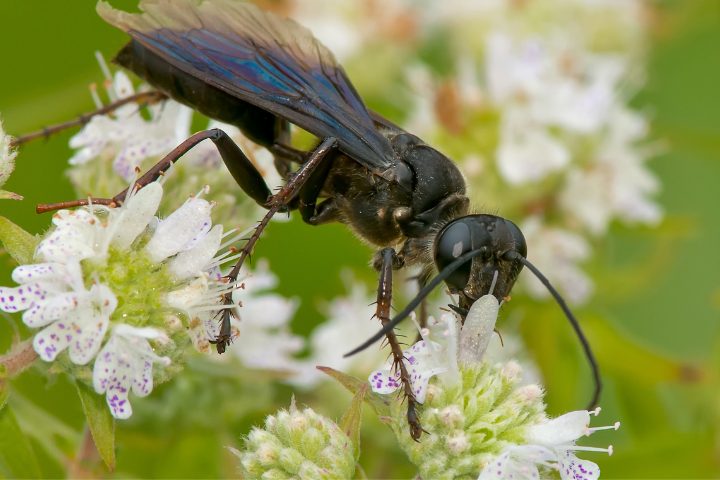 Is the Sting Poisonous or Venomous?

The sting of a great black wasp contains a paralytic venom that it uses to incapacitate its prey for eating. Moreover, this is a parasitoid wasp that lays eggs in the body of a host insect.

The paralytic venom takes away the host’s ability to fight back, get rid of the eggs, or escape without killing it.

While the venom in the sting isn’t as effective against humans and won’t paralyze you, the stings are truly painful.

You’ll need medications to control the swelling and the pain, and there’s a chance that it might trigger an allergic reaction.

Why does it sting?

The female wasp primarily uses its sting to lay eggs in the body of a host insect. They sting their prey thrice, injecting them with paralytic venom.

This prevents the host from fighting back or escaping while still keeping it fresh and alive for the wasp larvae that would hatch from the eggs.

The females then lay eggs under the prey or sometimes directly on its stomach. They carry it back to their nest.

When the larvae hatch, they have a ready snack to get started. They feed on it until they grow big enough, all the while keeping the vital organs alive till the end.

But don’t be scared if you get stung. You don’t have to worry about one of these wasps paralyzing you to lay its eggs.

In the case of humans, black wasp stings are mostly for self-defense. The wasp will sting you if you seem to be a threat. 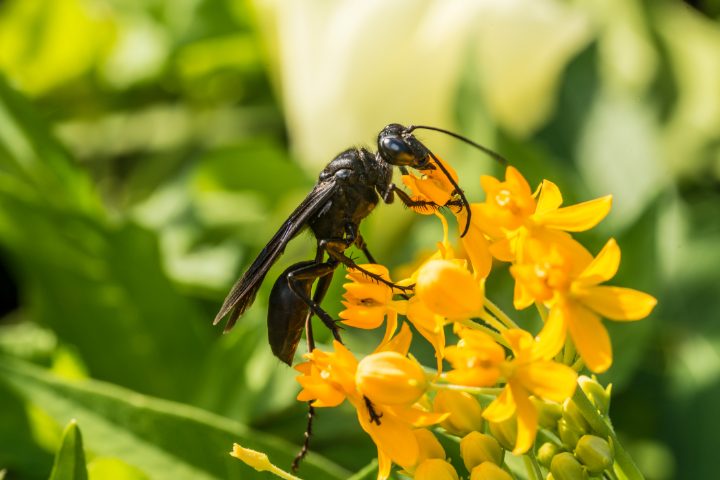 Unless you are allergic to insect stings, the wasp’s sting would only result in pain, swelling, and itching. While the pain can be torturous, you don’t have to worry about long-term effects or diseases.

Is the Great Black Wasp Aggressive?

Fortunately, these large wasps aren’t very aggressive. They usually keep to themselves unless you disturb them.

The common notion about wasps being aggressive insects isn’t wrong – the social wasps defend their turf quite aggressively.

However, the great black wasps are digger wasps that don’t have a colony and live in underground nests. They don’t have anything to defend.

Can a Great Black Wasp Kill You?

Don’t worry; the venom of a great black wasp isn’t fatal to humans. However, if you are allergic to the sting, you may have to take an antihistamine and seek immediate medical attention.

What Should You Do If One Stings You?

Getting stung by a great black wasp can cause itching, burning, sharp pain, swelling, and redness. You may experience additional symptoms like vomiting and nausea if you’re allergic to insect stings.

As long as the symptoms are mild or moderate, you may follow the steps below and self-medicate:

If the sting triggers an allergic reaction, you may need to take an antihistamine medication to control the itching and apply ointments or baking soda paste.

If the symptoms are too powerful or the swelling isn’t gone in two to three days, you need to see a doctor.

Are These Wasps Beneficial?

Despite their painful stings, great black wasps are a beneficial insect species. They prey on pests like cicadas, grasshoppers, and katydids that damage garden plants and crops.

What happens if you get stung by a black wasp?

Getting stung by these wasps usually results in pain, swelling, and itching. While the great black wasp’s pain index is not as high as other wasp species, it can still cause excruciating pain. It can also trigger allergic reactions if you are allergic to stings.

The adult great black wasp is attracted to gardens or other places with plenty of flowers, as they primarily feed on pollen and nectar.

Lavender is particularly attractive to wasps, so don’t be surprised if you find them around your lavender plants. 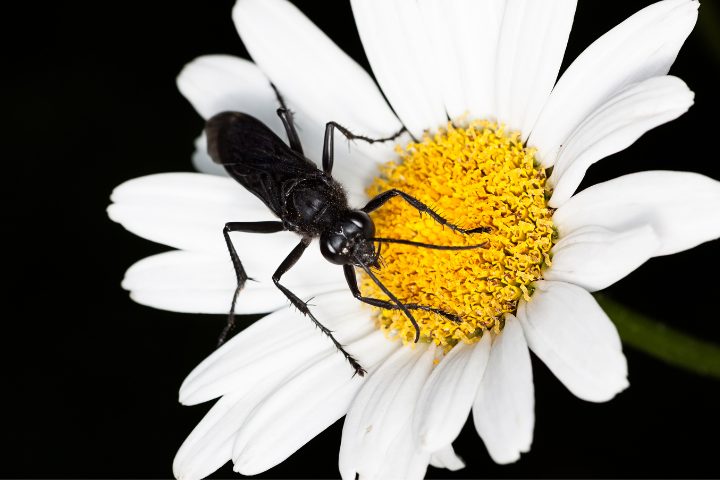 What wasp has the most painful sting?

Several species of wasps are infamous for having very painful stings in the world. These include the tarantula hawk wasp, the paper wasp, the soldier wasp, and yellow jackets.

As per the Schmidt pain index, the honey wasp’s sting is the worst. Getting stung by one of these wasps can be far more painful than a great black wasp sting.

You can mix a teaspoon of dish soap in two cups of water and spray it on the wasps or their underground nests. Alternatively, you may also use wasp sprays, electric swatters, or vacuum cleaners.

However, it’s advisable not to kill great black wasps as long as it’s avoidable, as it is a beneficial insect that can help control the pest population in your garden.

Well, now you know that having this cicada killer in your garden isn’t a bad thing as they help protect your garden from harmful pests.

If possible, just leave them be and don’t bother them. However, if you are allergic to stings or simply don’t want them around at all, you can spray them with soapy water or contact pest control.

I hope reading this article has helped remove your fears about getting stung by these wasps.

If a huge wasp is sitting in your garden, It is natural to check whether it stings or not. Many of readers have had the same query in the past, and we were able to resolve them.

Read more about the experiences of our readers with the great black wasp in the past. 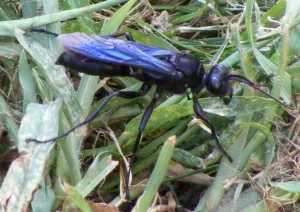 Big Blue Flying Insect
August 17, 2009
These bugs are living in a stone wall where I work in Rhinebeck, NY (it is summer right now). They fly out and bring back grasshoppers that seem to be paralyzed when they bring them back to the wall. They disappear with them in the wall and then a few days or weeks later (not sure) they drop the shell of the grasshopper out of the wall-like the entire inside has been eaten out.aaaaaaaa
Teresa B
Rhinebeck, NY

Dear Teresa,
This is one of two species of Thread Waist Wasps that we have trouble distinguishing from one another.  We believe it is a Blue Mud Wasp, Chalybion californicum, which according to BugGuide is :  “A large, active, blue-black wasp with irridescent blue wings. Frequents flowers for nectar and buildings for nest sites. Compare “Steel-Blue Cricket Hunter”, (or “Blue Mud Dauber”), Chlorion aerarium, which preys on crickets. This is about the same size as Chalybion, and is said to have a longer pedicel (narrow waist between thorax and abdomen). The body of Chalybion looks much more hairy, and more steely-blue, based on specimen photos.”  The other possibility is that it is Chlorion aerarium, also depicted on BugGuide. which states:  “Habitat  Although generally not closely associated with humans, they are found wherever their hosts (Gryllus crickets) are found, which could include close proximity to homes (though not so much as Sceliphron and Chalybion). Chlorion is usually found in open areas such as meadows, overgrown fields, dunes, beach edges, etc., although they may not necessarily hunt in the same habitat as they nest. They are sometimes associated with the Cicada Killer where the ranges of these two wasps overlap, C. aerarium digging burrows off side of the larger wasps nest (O’Brien, 1989).
Season  Late July and early August (in Michigan)
Remarks  Females mass-provision several serial cells, each containing from 2 to 9 nymphs or adults of Gryllus pennsylvanicus. Prey are transported on the ground, venter-up, with the wasp’s mandibles grasping the antennae of the cricket.”  It is worth noting that the adults of both species feed on nectar and pollen, and the crickets are used as food for the brood.  We will contact Eric Eaton to see if he can provide the exact identification. 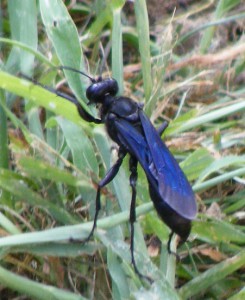 Daniel:
Ok, here are all the identifications:
The “blue mud dauber” or “Chlorion” is neither.  These are two nice images of a female “great black wasp,” Sphex pensylvanicus.  They hunt katydids as food for their larval offspring, as the submitter observed.
Keep up the great work!
Eric 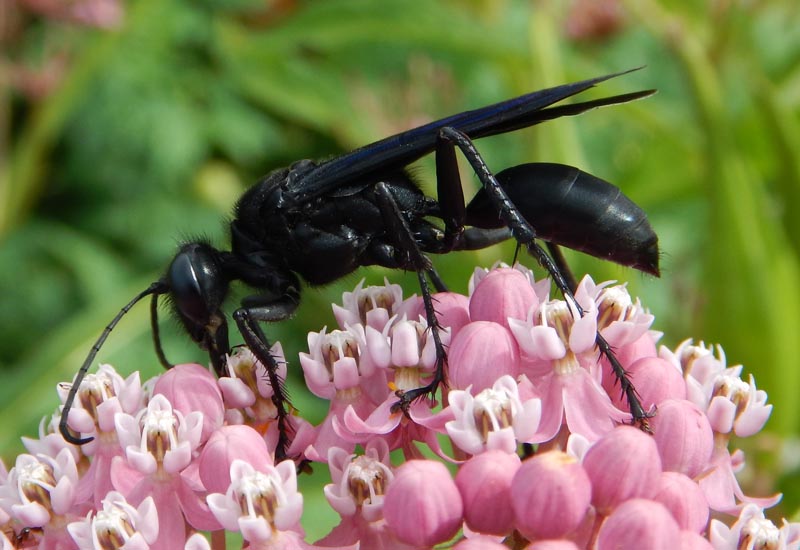 Hi Rob,
This is a Great Black Wasp and this image is gorgeous.  Female Great Black Wasps hunt Katydids to provision an underground nest where the larval wasps are developing.  The Great Black Wasp, Sphex pensylvanicus, and the Great Golden Digger Wasp, Sphex ichneumoneus, are classified together in the same genus.   This submission and your previous two postings are all being archived on our Milkweed Meadow tag.