Subject: Please not a cockroach….
Location: Berlin, Germany
April 4, 2017 11:10 pm
Dear Bugman, I keep finding these little guys in our entry way and adjacent kitchen (mostly in the kitchen). Occasionally, I will find them in other areas – dining room, bathroom, living room. I have seen an average of one a day since we moved in last summer, except during the winter, when I saw about one every few weeks. I can’t figure out where they are coming from or going to. They don’t seem to be into food or water. We have bananas and butter out 24/7, and I’ve only found one on the bananas and never in the butter. They aren’t under the sink, that I have seen. They are often just on the floor or the wall or the counter. I’ve tried to sneak in and pop on the light in the morning to find more skittering away, but I never find more. They don’t try to run away unless they are bothered (like me trying to scoop them into a ziplock). We have sprayed the entry way a couple of times for ants, which kills other beetles and spiders as well, but these guys seem to be somewhat immune to that. We are in Berlin, Germany. The photo has been lightened a little to make the markings easier to see – it is usually darker and hard to make out the markings on the upper back, and it includes a quarter for size reference. I can’t sleep at night for fear of infestation, whatever it is. Can you please help???
Signature: Buggy in Berlin 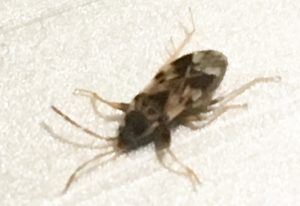 Dear Buggy in Berlin,
This is not a Cockroach.  We believe it is a Dirt Colored Seed Bug in the family Rhyparochromidae.  At first we thought it might be Rhyparochromus vulgaris, a European species that has been accidentally introduced to North America where it is causing residents distress as it reproduces in great numbers, but the markings are subtly different based on BugGuide images.

Fantastic! This is great news. I can’t tell you the peace of mind that this gives me. Thank you so very much. I only wish I would have thought to ask you sooner. I can finally sleep at night!