Did you know that life could survive 7000 feet under the ground? Welcome to the world of the deep cave springtails, the deepest living creature on earth.

Scientists discovered these creatures in the Krubera Voronya cave of Abkhazia, the deepest known cave in the world.

However, it wasn’t easy for the expedition team who discovered these mysterious creatures to reach them.

We will talk all about this amazing discovery and how these creatures have survived one of the most frightfully harsh and desolate environments in the world.

How Were the Deep Cave Springtails Found?

During the summer of 2010, the Ibero-Russian CaveX Team Expedition collaborated to explore the depth of Krubera Voronya – the second deepest cave on the planet.

During this expedition, much to their surprise, they discovered living creatures – namely the deep cave springtails – at a depth of 1,980 meters below the surface.

Scientists assumed that it was impossible for life to survive at such depths before this discovery due to the near complete lack of sunlight and sources of food.

Discovered in 1960, the Krubera Voronya cave is located in a remote area called Abkhazia, near the Black Sea in the Western Caucasus mountains.

It is undoubtedly one of the most mysterious places on earth. Its depth is 7188 feet (2191 m) below the surface.

The CaveX Team has been exploring the cave for more than ten years amid hazardous situations, with temperatures ranging from 32.9 to 41 degrees Fahrenheit.

Snow was the only source of water in the cave, and the team had to ration food to feed the 30 explorers for 30 days.

They also had to do all the work manually (no machines could work at that depth). 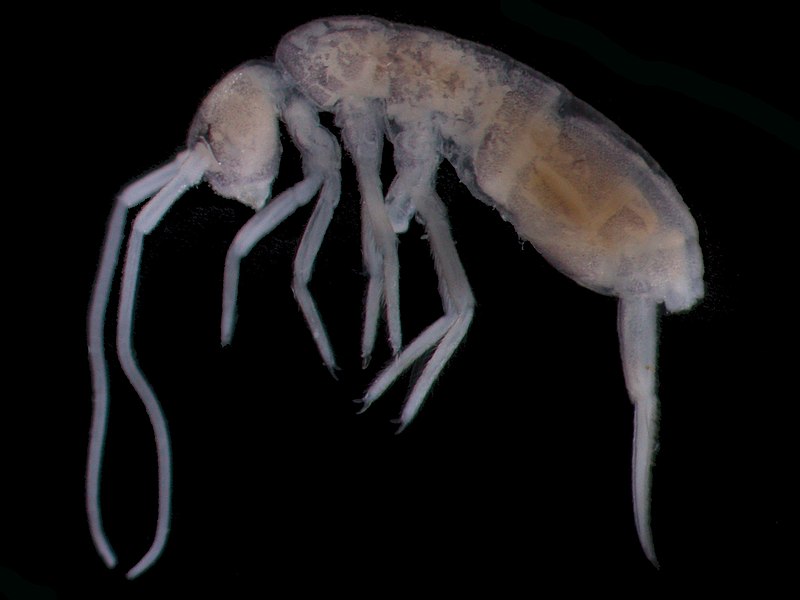 Two Spanish expeditioners discovered the deep cave springtails. They used a piece of cheese to trap their first specimen of these insects.

Deep cave springtails are eyeless creatures. In the depths of the cave, where there is no sunlight or any other sources of light, it makes sense that these insects never needed to evolve any eyes.

They are, however, equipped with a long chemoreceptor that helps them find their way (which is how they found the cheese!)

After studies, scientists have uncovered the following physical features of a deep cave springtail:

The deep cave springtail is a part of the subterranean fauna. Since it lives in the deepest cave on the planet, it has slowly evolved to adapt to the extreme conditions of its natural habitat!

So, what are the extreme adaptations of this species of springtails? Let’s read more about it below.

Deep cave springtails live in the permanent darkness of the Krubera Voronya cave.

Scientists at Lund University, Sweden, have observed that eyes cost energy because they consume oxygen.

Since cave-dwelling animals have a limited supply of oxygen, they save up on it to find food which is in very limited supply because there is no photosynthesis happening in the cave.

Therefore cave dwellers, including the deep cave springtails, have evolved not to have eyes at all.

However, these creatures have evolved extremely long antennae, known as chemoreceptors, to compensate for being eyeless. These help the springtails to guide their way below the earth’s surface.

Surprisingly, deep cave springtails still have pigmentation. Pigments are what cause coloration, which protects the insect’s body from the sun and sometimes predators (helps in camouflage).

Deep cave springtails are grey in color and have dark spots on their body.

In the absence of light, pigmentation is not important at all, which could only mean that these creatures have only recently reached the low depths of the earth.

What was found in the Veryovkina cave?

Expeditioners found small rivers, waterfalls, and species of rare shrimps, scorpions, and other microorganisms in the Veryovkina cave at different depths. The cave also had some fossil imprints in it.

What lives in Krubera cave?

The Krubera cave is home to various arthropods, including beetles, spiders, springtails, crustaceans, and beetles. Apart from these, you can find various types of bats in these caves as well.

Amongst these, one of the four species of deep-cave springtails was discovered 1,980 meters below the earth’s surface in 2010.

Are there different types of springtails?

Yes, there are different types of springtails. You can find nearly 700 species in America. However, the four species that scientists found during the 2010 expeditions were: Deuteraphorura Absolon, Schaefferia Absolon, Anurida Stereoodorata, and Plutomurus Ortobalaganensis. Expeditioners found the last one 1,980 meters below the earth’s surface.

What do springtails turn into?

Springtails are wingless, non-threatening creatures. They have three life stages: they start out as eggs, they hatch to become nymphs, and then they grow to become adults.

Springtails are quite common in North America, so much so that they are considered a pest in many regions of the country.

They are tiny in size but are known for their ability to jump really far using their furculum.

Their whole lifespan is just about two weeks long. Springtails thrive in damp regions and are hard to see anywhere except in damp areas. They eat mold, and in this sense, they are a useful pest to have in some contexts.

Until 2010, a type of scorpion and an insect known as silverfish were considered the deepest known creatures on earth.

The discovery of deep cave springtails has proven yet again that whatever the conditions, life will find a way.

It has helped us understand the adaptations that life has taken to survive the extremely harsh environment of the deepest caves on earth.

Thank you for reading; we hope you enjoyed reading about the deepest living creatures known to man!