Mysterious Beetle
Location:  Casa Grande, AZ
July 27, 2010 7:47 am
I found this beetle just walking across the floor at work. It does not appear to fly and it moves pretty slowly. It likes to play dead. It can flip itself over quite easily with its long legs. It did something like a headstand once, but it has not released any nasty smells or blistering agents, so it doesn’t seem to have that kind of defense.
The underside is of the abdomen is smooth, while the top of the abdomen is covered in tiny bumps. The antennae are short, divided into tiny, somewhat v-shaped segments, uniform, and consist of a single strand with no branching. The mandibles are small and there’s little, if any, gap between them and the head.
Here are some pictures with a ruler for scale. On the picture of the top of the beetle, you can see both the inches and mm side of the ruler. The picture of the underside shows only the inches side of the ruler.
Do you guys know what this thing is? I’m told that they’re fairly common, but I’ve never seen one before and nobody knows what they’re called.
Matt 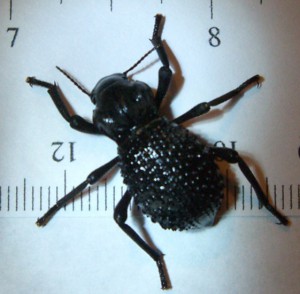 Update: I think I solved this one myself by looking at a few more
pictures on your site.  There are just too many kinds of beetles.  I’m
99% sure now, but I would appreciate a confirmation, though.
Death Feigning Beetle
Species Cryptoglossa variolosa
2009/08/31/ironclad-beetle-12/
http://bugguide.net/node/view/148169/bgimage
Seems like it has an apt name.  It played dead any time I went near
it.  Note that this one was originally covered in sand or dust giving
it a whitish appearance, like I see in many other pictures.  This one
got a bath before its photo shoot, which is why it’s solid black.  It
was then released, avoiding unnecessary carnage.
Matt 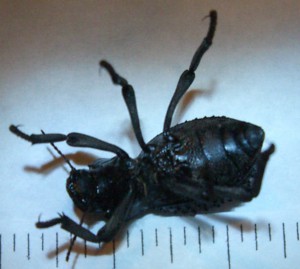 Hi Matt,
YOur beetle is a Darkling Beetle in the family Tenebrionidae, but we are having issues matching it to a species.  It looks quite similar to Asbolus verrucosus, which is pictured on BugGuide,  though that species appears to be gray while your specimen is black.

P.S.  The Death Feigning Beetle you cited is in the same tribe, Centriopterini, as the Darkling Beetle we cited.  We will check with Eric Eaton to see if he can provide a conclusive answer.

Please note that this beetle was initially grey/white.  If it’s like
some of the pictures I’ve seen, that white or grey may be sand or dust
or something similar.  This beetle was initially covered in something
that washed off.  We actually have a lot of white dust (specifically
lucite, a white dust of plastic particles) at work near where I found
it, so this guy got a bath before I took his picture because I thought
it would make it easier to ID correctly.  That might explain the color
difference.  That said, there’s plenty of ordinary dust outside.  This
is a desert, after all.  I don’t know if it had lucite on it or some
other dust.  There’s simply too much dust around here to know.
It DEFINITELY tries to feign death, though (though I realize that
other beetles may do that).  The first thing it did when I examined it
was to flip over and lie still for several minutes.
Unfortunately, I released the specimen already.  For future reference,
what parts of it should I have tried to get a good picture of?  I no
longer have that beetle ID guide my biology teacher had years ago, but
I remember that it had me do things like count the number of segments
in the beetle’s leg (and to carefully look for hidden segments).  I
tried to find some kind of helpful guide like that online, but had no
luck.  That’s when I found your site.
Matt

Hi again Matt,
Thanks for writing back with additional information.  As we stated earlier, we are waiting for Eric Eaton to get back to us.  The kinds of details that help identify beetles are antennae and legs.  We believe there is enough detail in your photos for someone with more refined skills of identification, like Eric Eaton, to be able to identify your beetle.  Please be patient and see what kind of response we receive.

No hurry.  I just thought I’d let you know that it was white & dust
covered before, given that the coloring was confusing you.
Incidentally, if you want ideas for future content for your blog,
consider giving out tips on getting good photographs (and which parts
are important to show in detail).  I had to take dozens of photos
before I got anything but a black blob.  And my “ruler” looks strange
because it was actually a PDF that I printed out, because I didn’t
have a ruler handy (or rather, the ruler I did have was metal and too
shiny to be readable when photographed.
Matt