Bird of Paradise Fly from Australia Leaf Beetle from Europe

Subject: Unknown Moth
Location: Tacoma, Washington USA
June 8, 2017 6:05 am
Found this moth hanging around a black currant. Pictures don’t really show it, but at a distance of a couple feet, the moth is really difficult to see flying, and even harder to see on the currant branch. Saw it flying in the same area three times during the day. Only saw it land only once. Got the pictures then. Body is 13-15 mm. I didn’t notice the insect shell it is standing on until I looked at the pictures. Don’t know if they’re related.
Signature: Ralph 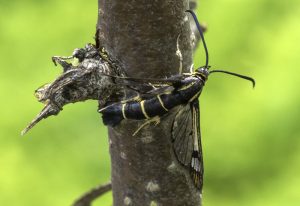 Dear Ralph,
This is one of the Clearwing Borer Moths in the family Sesiidae, a group with many members that are excellent wasp mimics.  Thanks so much for supplying the name of the host plant because we were able to quickly identify your Currant Clearwing Borer, Synanthedon tipuliformis, thanks to images on BugGuide where it states:  “Larvae bore in the canes and branches of species of currants and gooseberries (Ribes, Saxifragaceae) and to a lesser extent blackberries (Rubus, Rosaceae). “ 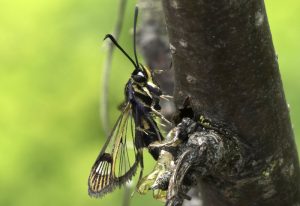