2 interesting bugs
Location: Kitchener Ontario Canada
September 29, 2011 2:55 pm
Hi, Bugman
I have 2 bugs that I am curious about..
The first was found deceased on my windowsill, even so very pretty insect.
The 2nd Yellow bug I found today has the shape of an assassin bug almost from the top but I noticed mantis like hooked forelegs when viewed from the side.
Thanks
Signature: Martzart 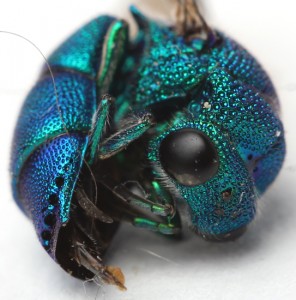 Dear Martzart,
The beautiful metallic blue insect you found dead in your car is a Cuckoo Wasp in the family Chrysididae.  Your yellow insect is an Ambush Bugin the subfamily Phymatinae.  In the not too distant past, Ambush Bugs were classified in their own family, but recent taxonomy has reclassified them as a subfamily of the Assassin Bugs. 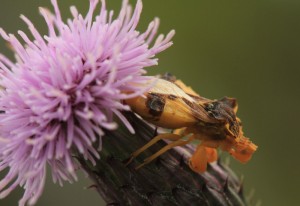