Subject: Blue Fly
Location: Southwest, Florida,
November 15, 2012 11:25 am
I have no idea what kind of fly this is I have searched everywhere and cannot find a picture of this..this picture was taken in southwest Florida, November 15th..
Signature: David 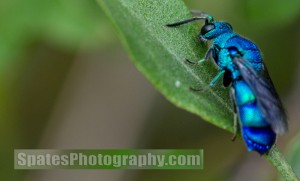 Dear David,
This magnificent creature is not a fly, but rather a Cuckoo Wasp in the family Chrysididae.  The common name originates from the reproductive behavior female who rather than building her own nest, parasitizes the nest of another wasp.  According to BugGuide: “Some species are parasitoids and others cleptoparasites. Either way the host larva dies. …  Parasitoids feed on the larva of the host and cleptoparasites “steal” the host’s food. The food-stealing behavior of cleptoparasite species resembles that of the cuckoo bird and gave rise to the cuckoo wasp’s name. Hosts of parasitoid species include bees, sphecid wasps, potter wasps, sawflies, silk moths, and the eggs of stick insects. Cleptoparasitic species feed on provisions of sphecid wasp nests, which may include dead spiders, true bugs, aphids, or thrips.”