A Bug I Photographed With Outstanding Coloring!
Location: Southern New Jersey
September 26, 2011 9:24 am
Hey bugman,
First time on your site. I actually have a bit of a bug phobia, but I got over my fears to shot this little guy, specifically because his coloring was so amazing! FYI I did not enhance his colors in any way. Wit htat said, I’d love to know what he is since I’ve never seen anything like this before! He was tiny… probably half the size of my pinky fingernail.
Thanks,
Signature: Jeff D. 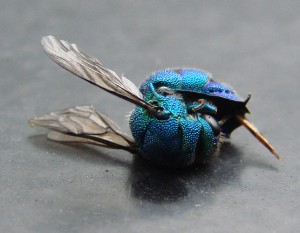 Hi Jeff,
This is a Cuckoo Wasp in the family Chrysididae.  We agree the colors are magnificent.  Cuckoo Wasps have the ability to curl up into a ball to defend themselves.  Here is some information from BugGuide:  “Most species are external parasites of wasp and bee larvae … Some species are parasitoids and others cleptoparasites. Either way the host larva dies. … Parasitoids feed on the larva of the host and cleptoparasites ‘steal’ the host’s food. The food-stealing behavior of cleptoparasite species resembles that of the cuckoo bird and gave rise to the cuckoo wasp’s name. Hosts of parasitoid species include bees, sphecid wasps, potter wasps, sawflies, silk moths, and the eggs of stick insects. Cleptoparasitic species feed on provisions of sphecid wasp nests, which may include dead spiders, true bugs, aphids, or thrips. … The female sting has been modified into an egg-laying tube with highly reduced valvulae and poison gland. As a result, unlike most other aculeates, chrysidids cannot sting and can be easily handled.”