Subject: White pupae?
Location: Portsmouth, VA
November 13, 2015 9:20 am
Good morning from Tidewater area, Virginia.
I found these white pupaeish looking things on an ornamental bamboo plant outside the hospital parking garage. At first I thought they were bird poop but the clusters looked less planned.
Are they moths-in-training perhaps?
Signature: Dia from Chesapeake 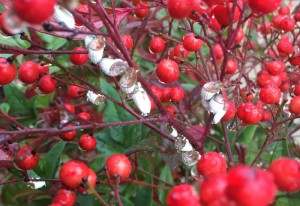 Dear Dia,
These are Cottony Cushion Scale insects, Icerya purchasi, and you can compare your image to this image on BugGuide.  According to BugGuide:  “The white fluted part of the insect is an egg sac that can contain up to 1000 eggs. The insect is hermaphroditic, producing sperm that can fertilize its own ova, but in an alternate reproductive strategy it can also make winged males that can fertilize the female part of other individuals.  When it first appeared in the w. US it was a major pest of Citrus crops. In CA, around 1889, it was an early success story for biological control by beneficial ladybird beetles (Rodolia cardinalis). (Full story) The control was so successful that in 1893 a Florida nurseryman asked for some of the beneficials to be sent to FL, to test as a control for other scale insects. The scale was included in the shipment as food for the beetles, and thus accidentally introduced to FL citrus.”