Bug Identification
July 25, 2009
In our pool last night, our daughter was stung or bitten on the thumb by some type of bug that I couldn’t identify in our limited insect guide.
I took some closeup photos of the bug, top and bottom side. Can you possibly tell me what this bug is?
Sincerely, Phillip (*ed. note:  surname edited out August 8, 2009)
Seguin, Texas (South Central Texas near Austin and San Antonio) 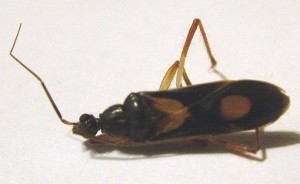 Dear Phillip,
Edited on August 5, 2009:  We at What’s that Bug would like to use this encounter with the Corsair Assassin Bug as a cautionary tale that is instructive and might  reduce  “Unnecessary Carnage” of bugs that appear menacing in the future. Often people kill insects out of fear or other reasons, and in the case of beneficial insects, we find this to be problematic.  In an attempt to educate our readership, we have an entire section that depicts creatures we feel have been killed unnecessarily.  Edited on August 5, 2009:  We are uncertain as to the exact cause of this Corsair Assassin Bug’s death. Yes, most Assassin Bugs can and will bite if provoked, but they are also beneficial predators that feed on many problematic insects in the garden.  If one finds an unknown insect or spider on one’s person, the best way to remove it is by blowing it off.  Swatting almost inevitably will end in a bite if the insect is capable of biting.  We must admit that we do swat Mosquitoes, but Mosquitoes bite to feed, and not as a defense.  Though the bite of most Assassin Bugs is painful, the only ones that are truly dangerous are the Blood Sucking Conenose Bugs in the genus Triatoma, as they can spread Chagas Disease.  Charles Hogue in Insects of the Los Angeles Basin writes of a member of the genus Rasahus: “This bug, like the Assassin, has a fearsome bite —  only more so.  People who have received a bite say it gives a sharp burning sensation, more acutely painful that a Honey Bee’s sting.  The bug normally uses its beak to suck the blood of other insects and bites humans only in self-defense.”  BugGuide indicates two members of the species living in Texas, Rasahus biguttatus and Rasahus hamatus, but we are uncertain which species you have submitted. 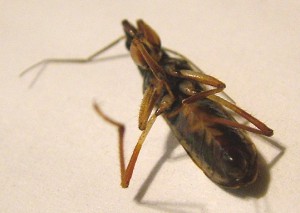 Ed. Note:  In an attempt to respond to Mr. Laird’s original letter, What’s That Bug? even took the time to send a second email after receiving the following request.
Sun, Jul 26, 2009 at 7:16 PM
Daniel,
I really appreciate your response to my recent insect submission.  I got a short message from earthlink.net that your message was blocked?  I am sorry for earthlink.net’s block message.  Would it be too much trouble to forward your response to the following email address?
actual email address removed
I apologize for any inconvenience.  I look forward to your response.
Sincerely,
Phillip (*ed. note:  surname edited out August 8, 2009)

First, let me thank you for helping to identify the Corsair Assassin Bug.

Next, I’d like to clear up your assumption. In your comments below, you published an unverified assumption “that we killed the Corsair Assassin Bug to identify it.”  This statement was published on your web site before you even discussed your assumption with us.  In your web site posting, you defamed, libeled, embarrassed and belittled my family and my minor daughter.  You referred to the death of the bug as “Unnecessary Carnage.”

1.  We swim at night frequently.

2.  We swim with as little light as possible to keep from attracting insects and bats. Yes, we have bats in our neighborhood.

3.  My nine-year old daughter was swimming at night when she was bitten by the Corsair Assassin Bug.

4.  Out of human reaction, she slapped at the bug to stop it from biting her because she could not see what it was in the dim light.  We do not have an outside light around our pool, just a small underwater pool light.  We have a large population of several kinds of wasps also.

5.  The bug was found on top of the water after our minor daughter began screaming and crying and the insect was placed in a vial so we could take a photograph of it.  None of my family purposely killed this bug so your unnecessary and defaming comments of ‘Unnecessary Carnage’ below is just totally untrue and publicly libels, defames and harms my family’s character.

6.  Out of curiosity, I wanted to find out more about this insect because my daughter and I are allergic to most wasp/hornet/bee stings and bites so I submitted the photos of the insect to your web site.

We didn’t kill this insect.  You have made libelous and defaming untrue statements both on your web site and to us in an email.

I am a pretty civil fellow.  I am going to ask that you remove any reference to us killing the insect to identify it because that is not a true statement and such a statement libels our family and harms our reputation through defamation of our character.  If you allow this untrue information to remain on your web site, I am going to contact our legal department and have them speak with you about this matter and if necessary, secure a court order to compel you to cease your defamation and libelous comments about our family, remove the libelous, untrue and defaming statements you published on your web site,we will pursue maximum monetary damages as allowed by the Texas law, and of course, to pay our legal fees and court costs.

Retraction of Unnecessary Carnage allegation
Dear Phillip,
Thank you for the clarification.  We are untagging your letter and it will no longer be filed under Unnecessary Carnage.   Our original response included the statement which you find offensive:  “Though we are uncertain the exact circumstances that resulted in this death, we are guessing it stems from the bite and the need to identify if this is a potentially harmful species.”  That was an opinion and was not presented as a fact.  We have now edited that statement to read Edited on August 5, 2009:  We are uncertain as to the exact cause of this Corsair Assassin Bug’s death. By your own admission, the insect was swatted because of the bite.  By your own admission, you did write to our website and solicited an identification which you did receive.   The reason this letter was originally tagged as Unnecessary Carnage is that it was hoped that informing you and the rest of the public that though the Corsair Assassin Bug will bite, it is not a species that should be killed unnecessarily and there was no malice intended toward you or your family.  In order to prove libel there must be four elements.  There must be publication which we did.  There must be identification which there was because you chose to sign your name when you wrote to us* and not because we sought out your real name to attach to the letter.  There must be defamation which you are claiming, though we question if our original response had any defamation.  Finally, there must be falsehood.  We have now edited our inaccurate guess and published your own explanation.  We hope that the steps we have taken to make the record right on this matter meet with your satisfaction.

*Ed. Note: August 8, 2009
In a sincere attempt to reduce any public humiliation that may result to Phillip and his family, we have edited the surname from the email correspondences that were freely submitted to our site by Phillip and not solicited by us in any way.  The surname was freely supplied to us when Phillip used the submission form on our website that requests “how you want your letter signed”.  We have not heard back from Phillip after posting our retraction.

Unnecessary Carnage Comment
August 9, 2009
RE: unnecessary carnage
I love your site, and visit it several times a day. Many thanks for posting such lovely images and so much information (you helped me ID a one-eyed Sphinx moth here in Seattle)! I also love the fact that you tell folks when they have committed an act of unnecessary carnage, but sadly, you have been very hesitant to do so lately… Please don’t let one or two unhinged people keep you from providing a vital service- letting humans know that insects are innocent until proven guilty!
Leah S.

18 Responses to Corsair Assassin Bug: Dead after biting someone