Helicoverpa zea
Location: New Jersey
July 31, 2011 8:14 pm
Hi buggy peeps!
I love your site and often rely on it to ID bugs for myself or friends.
Earlier today, I found a lovely caterpillar in the garden on one of my tomato plants. Thinking it was a butterfly, I took a few photos and rehomed it in one of our flower gardens. When I came inside, I showed the photo to friends who were alarmed that I had rescued a ”tomato worm.”
I ran outside, and promptly fed it to one of my chickens (who quite enjoyed it.) I know that you don’t endorse extermination, but perhaps this was ok because it was the ”circle of life?”
I came inside and searched online for tomato worms. It lead me to photos of green horned worms. Further searching lead me to Helicoverpa zea, which is considered a corn worm and not tomato worm.
I have two questions for you:
How did it get in my garden? We are not growing corn this year.
Is it ok for my chicken to eat this creature? I found out later that you should not feed the green tomato worms to chickens, so I got nervous about the corn worm.
Ok…I lied. Two more questions: Why is it called a worm at all? Isn’t it a caterpillar? I didn’t think caterpillars were considered worms? And… how do all of these agricultural type insects come to exist in veggie gardens? Are they always present in our yard and multiply in the right situation, or do they hitch a ride on other plants that may be brought in? The majority of our garden was started from seed here at the house.
Thanks so much for your time in reading this and the response if you are able to make one. I know you are very busy!
Hope you’re enjoying your summer as much as we are!
Signature: Annie 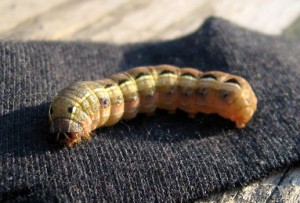 Hi Annie,
Thanks for your lengthy and amusing query.  We believe you are correct that this is a Corn Earworm.  It fits the description provided on the University of Florida Entomology Departments Featured Creatures website which indicates:  “The larva is variable in color. Overall, the head tends to be orange or light brown with a white net-like pattern, the thoracic plates black, and the body brown, green, pink, or sometimes yellow or mostly black. The larva usually bears a broad dark band laterally above the spiracles, and a light yellow to white band below the spiracles. A pair of narrow dark stripes often occurs along the center of the back. Close examination reveals that the body bears numerous black thorn-like microspines. These spines give the body a rough feel when touched. ”  Images on BugGuide show some of the variability.  Despite its name, the Corn Earworm feeds on numerous garden crops, leading to other common names.  According to BugGuide, the Corn Earworm is also called a Tomato Fruitworm, Bollworm, Sorghum headworm and Vetchworm, and this is explained thus:  “As its common names suggest, larvae feed on a wide range of hosts, including many field crops, hence this species has been much studied.”  Since the caterpillar is the larval form of a moth that flies, adults gain entry to gardens on the wing and the caterpillars do not have to be introduced on plants. While we have heard that chickens will not eat Tomato Hornworms because of the taste, they will eat a multitude of other insects, and to the best of our knowledge, the Corn Earworm is not toxic to them.  You did some copious research before submitting your questions, and you even took the time to learn the scientific binomial name Helicoverpa zea, which is the only true name that should be used to describe your insect.  Common names, though they are often quite catchy, would confuse scientists, especially those from linguistically diverse cultures.  The language of popular culture does not follow the strict scientific guidelines for names.  Caterpillars are wormlike, and the layperson would tend to use names that are descriptive and easy to remember, hence the name Corn Earworm to describe the caterpillar that will crawl into the ripening ear of corn to feed on the kernels.