Subject:  Unknown Bug
Geographic location of the bug:  Stormville NY
Date: 06/22/2019
Time: 03:43 PM EDT
Your letter to the bugman:  Hello, I found this bug on my sidewalk it had four legs and each of the legs has black squares hanging off each leg. It could fly. It’s body was white but the wings were black. I have never seen an insect such as this one and was really curious as to what it could possibly be.
How you want your letter signed”  Simran Kumar 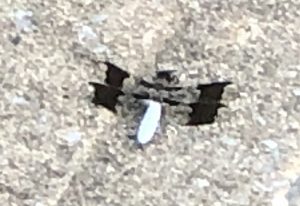 Dear Simran,
Despite the blurriness of your image, the distinctive markings of the male Common Whitetail Dragonfly are unmistakable.  Here is a BugGuide image for comparison. What you have mistaken for four legs are actually four wings.  The legs of the Dragonflies are useless for walking.  The Dragonfly uses its legs to perch, to land, to catch food by creating a basket and to hold onto its mate.  The Dragonfly is capable of amazing feats while flying.