Dear Bugman,
I have been gardening or helping to tend to the garden since I was just a wee fella.Most of my life was spent gardening in Ohio.Shorter growing season,not a whole lot of bugs.Cold winters killed alot of the buggers I guess.
we move to Georgia about four years ago.whole new ballgame you might say.Since moving here I have discovered at least forty new insects I never knew.Some of these things can eat entire plants in a night.Well maybe not that bad but close.
I have searched high and low to figure the latest one out.You may be my last hope.So far they have wiped out my potatoes and have since migrated to the tomatos.They are less than a quarter inch in length, soft fat bodies,red except for the head and underbelly,looks like about six or eight legs,black spots.The head is much smaller than the body.Oh and they’re really juicy when you pick them off.
I wish I knew how to send a picture on this stupid thing but I don’t.Any help or pic
tures for me to look at would be appreciated.
Thanks Doc.
Frank Kovach

Dear Frank,
You have Colorado Potato Beetles, Leptinotarsa decemlineata. The grubs are as you describe and the adults are striped black and yellow. Both adults and grubs feed on potatoes and related plants including tomatoes. This is an example about how a relatively unimportant insect can change its role as the environment changes. this beetle was once native to the Rockies, living on nightshade and other wild members of the potato family Solanacea. When settlers began togrow potatoes, the new food gave the beetles a fresh start. they prospered and spread, till they now exist in practically all of the 48 continental states. Here are some photos and more information can be found on this site:
http://creatures.ifas
.ufl.edu/veg/leaf/potato_beetles.htm 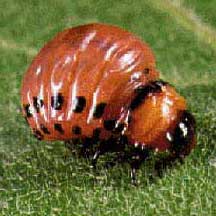 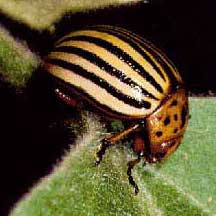 One Response to Colorado Potato Beetle