Black and Yellow Bug
Location: Millbrae, CA
August 23, 2011 5:45 pm
Hello,
I found this guy hanging out under the sunny part of my bathroom closet door. It was yesterday, at Millbrae, CA (94030). I can’t figure out what this is. It moved really really super fast like a silver fish does. Its underside was white with a lot of tiny parallel segments. It’s very mysterious, I’ve never seen it before. I thought it was going to move like a lady bug but it did not. It also has long skinny black legs and antenna. What is this? And did he travel here from a flower? Or is from this area? Never seen it in my life.
Thank you! -Crystal
Signature: Crystal 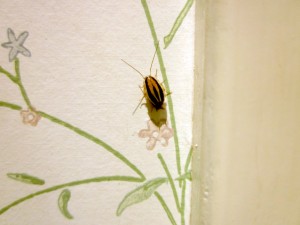 Hi Crystal,
We will identify this Cockroach in the morning.  We really love your photo which would be an excellent image if we ever do another calendar.

PS. I think that two long antennas were actually coming from his butt side.  As you can see, he has a small head and smaller antenna on the other side. When I caught him with my insect looker, he moved forward from the side that is opposite of those 2 really long antennas you see up top.
Crystal

Hi Crystal,
Your Cockroach is Phyllodromica trivittata, and BugGuide provides some interesting information, beginning with:  “Recently introduced into California, apparently now in Marin, Petaluma and Cotati” and “Reports of high abundance both indoors and outdoors make it likely that reproduction is occurring outdoors with subsequent invasion of nearby structures. As this species adapts to this new environment, studies will need to be conducted to confirm this.”  Here is a final remark regarding its origins:  “Known from dry habitats around the Mediterranean. It has been recorded from Morocco; Algeria; Spain; Italy (Sardinia Island); Italy (Sicily); Libya; and Israel. Given that it has not been recorded as being a pest in buildings in those countries (as far as I’m aware) it is unlikely to invade buildings in the USA. Comment by George Beccaloni (The Natural History Museum, London, UK).”  The head is actually on the side with the long antennae.  The shorter appendages are known as cerci and BugGuide has a nice definition of them.

Thank you for identifying this mysterious creature… but cockroach does make sense, especially its swiftness, its one piece body – which eliminated the cucumber beetle idea, its cerci, and its non-beetle looking underside… it’s a pretty cockroach.  But the idea that it’s a cockroach is kind of creepy, especially because its American cousin is a pest. 🙂
Thanks again!
-Crystal

Wood Cockroach: Drowned in the Fountain