Never have seen one of these before
This guy flew right at me as I was sitting on my back porch and instinct lead him to hit the ground. He is nearly two inches long and was not able to fly after the impact but he jumped like a Mexican jumping bean. Even on his back, he would pop up into the air nearly a foot high. No wings were being used, apparently just some weird internal mechanism. The picture is a little blurry, I apologize. I was trying to take it as fast as possible before it jumped on me. Hopefully you can identify this amazingly armored insect. He is hard as a rock and a series of swats from the swatter did nothing but make him jump more. I know you don’t approve of such actions, but he really gave me the creeps. I live in Collinsville, IL and there are cornfields nearby the area. Thank you for your time.
Kris 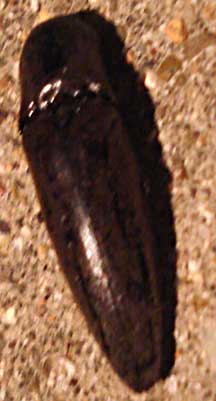 Hi Kris,
Both your photo and your written description leave little doubt that this is a Click Beetle in the family Elateridae, but exact species, genus or even subfamily will be nearly impossible to determine based on a photograph. Click Beetles have the ability to flex at the junction of the thorax and abdomen with enough pressure to snap the beetle into the air so it will land on its feet if it began in a seemingly helpless position on its back. This action produces an audible click, hence the name Click Beetle.