Subject: strange abdomen or ovipositor? wasp?
Location: Tinley Park, IL, USA
July 21, 2012 12:19 pm
Hello!
Was wondering what sort of insect this may be? Wings had a slightly yellow tinge and abdomen had an unusual end that pointed back towards the head.
Was hanging out on a screen that led to my balcony. Was able to shoot it’s underside, but it’s back was hard to capture because of the sky backlighting. It looked like it had little yellow ”shoulder straps” that are faintly visible in the photo. Head to abdomen was just under an inch long.
Was shot around 2pm on July 14, 2012.
Signature: KippyQ 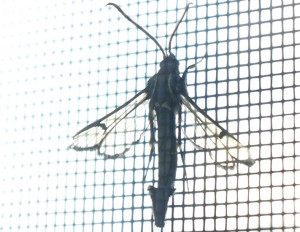 Dear KippyQ,
This is one of the Clearwing Moths in the family Sesiidae, a group that contains many wasp mimic members.  We believe we might have correctly identified your Clearwing Moth as Synanthedon fatifera based on this BugGuide photo, though there are many similar looking members in the genus Synanthedon.