Cicada Killer is not aggressive

Large flying insect
Location: N.W. Ohio
July 23, 2011 9:20 am
I live in N.W. Ohio in Defiance County and recently have seen several of these rather large flying things, and wondered what they are. They are brownish in color with stripes on their back half that sort of resemble a bee, but not exactly. They are an inch and a half or maybe slightly larger, swept back wings, and are on the move constantly. I managed to catch this one stopping for just a second on the patio. They hang around my flowers but don’t seem to feed on them and I have had them buzz by me but don’t seem aggressive to humans. Any help? Thank You.
Signature: John Geiser 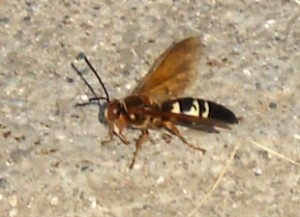 Hi John,
We have posted several letters recently in an effort to inform folks that Cicada Killers, like the one in your photograph, do not need to be exterminated as they are not aggressive wasps.  We want to draw our readers’ attention to your email which indicates:  “I have had them buzz by me but don’t seem aggressive to humans.”  We hope your letter will help save the lives of Cicada Killers that have nested near peoples’ homes.

Thank you so much, Daniel. Once I figured out how to search your site I did come up with the pictures and descriptions already posted. That was shortly after sending my question to you. Good work and keep it up!! I promise not to kill any of them, but that won’t hold true for the mole that’s tearing up my flower garden!! Thanks again. John Geiser

First Cicada Killer of the Season