Subject: Large wasp
Location: Gaithersburg MD
August 5, 2012 1:42 pm
I live in MD and have a lilac bush that is now covered with what appear to be giant wasps. There is ”saw” dust at the base of the tree, there is a sweet odor, and there seems to be several dead limbs now on my bush. The wasps seem to be eating into the tree and are about 2 inches long. They are congregated at the base and several limb joints.
Signature: Vandy 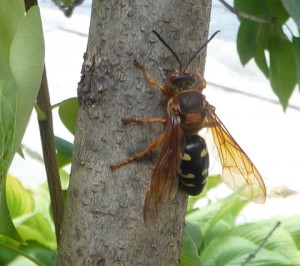 Western Cicada Killer: Dead in the interest of Knowledge