Large Wasp!
Location: New Orleans, LA
July 10, 2011 7:06 pm
I found this on my back porch, it is the second one I have found and am curious what it is and if I need to start looking for a nest of some sort? This is the largest wasp I have ever seen (if it is a wasp?)
Signature: –Christopher

with a little more digging I found out what type it was online.  Found (and killed) in New Orleans, Louisiana.  Apparently they’re a local bug, but it’s only the 2nd one I’ve ever seen in 30+ years.
Thought you’d be interested to know if you didn’t know already!  Cicada Killer, Sphecius speciosus 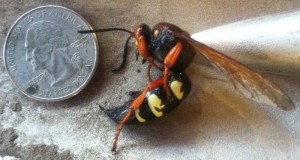 Hi Christoper,
This is a Cicada Killer and it is a Sand Wasp in the tribe Bembicini.  Whenever we try to lobby in support of Cicada Killers, we get some heat.  Cicada Killers are solitary wasps and a female will dig a burrow that she provisions with paralyzed Cicadas that become the food for her developing brood of larvae, so you would not be looking for a traditional Wasp’s Nest.  When there is sandy soil that Cicada Killers find attractive for nesting, a colony may develop, but they are not social wasps like hornets.  We receive several letters each year from people who have unwanted colonies of Cicada Killers, complaining that the Cicada Killers are aggressive.  Males defend territory and will dive bomb anything that enters the territory, but males lack stingers.  Larger females do not tend to be aggressive, but they possess stingers and they might sting.  We have not received any authenticated reports of anyone actually being stung by a Cicada Killer, though we would not rule out that possibility.