Thank you for being here!
July 18, 2011 10:08 pm
Dear Bugman,
Over the past few months since discovering your site, I have spent countless hours with my nose pressed up to the monitor searching for this or that newest discovery. It began with an infamous “Toe-Biter” and continued with a pair of wood grubs that my boyfriend and I raised through the winter which turned out to be a couple of Osmoderma eremicola beetles. Fast forward to today, when I was asked at work to identify an enormous flying wasp which turned out to be a Cicada Killer. By so quickly discovering what had been flying around the office I became a hero, and the life of the wasp was spared as I was able to relay the details of it’s relative harmlessness. Facinating insect! This information came in handy quite unexpectedly and much to my relief a few hours later as in the garden I felt something quite large crawling over the top of my sandled foot. Another cicada killer! We had just experianced a strong thunderstorm with high winds and heavy rain, and I have  feeling that
this soggy and sluggish creature was still disoriented by the pummeling it had just taken. Now as much as I love insects, to see something of that size and resembling a hornet as it does, I normally would have reacted with significantly more panic. However, with my recently acquired knowledge, I was able to gently replace her on the ground without fear of harm. A little information goes a long way! Oh yes -after witnessing my collectedness in it’s removal whilst explaining the taxonomy and life cycle of a ‘giant scary bug’, my boyfriend now thinks I’m superwoman. So thanks all around! You do awesome work!
Signature: DaleShannon 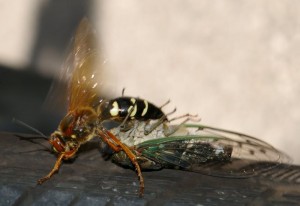 Dear DaleShannon, superwoman,
Thanks so much for your personal account regarding the Cicada Killer.  At this time of year we find ourselves working overtime to try to convince people that they do not need to exterminate every wasp they encounter.  It seems there is this general perception that the safety of children is compromised if there is a wasp anywhere within 100 feet of a toddler.  We try to lobby for the preservation of these necessary creatures in the food chair, though the protective hysteria that seems to accompany parenting often overwhelms common sense and a respect for other living creatures.  We have pulled a photo of a Cicada Killer from our archives to accompany this posting.