Subject: chunky bug in backyard. what is it?
Location: Bloomington, IN
August 11, 2015 9:45 am
Hello there!
There seems to be a dispute going on over the identity of this bug I ran into in my backyard. Some say it’s a cicada larva, others a potato bug (aka Nino De La Tierra/Jerusalem Cricket?). It seems to have crab-like claws! Do you know? Sorry it’s covered in dirt in this photo. It’s long gone, otherwise I would clean it off and take another pic…
Thanks!
Signature: Brandon 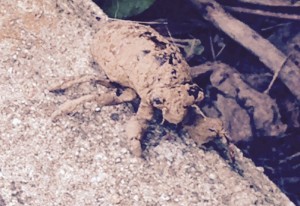 Dear Brandon,
Though it is theoretically not a Cicada larva, those that said that are closer to the truth.  This is actually the exuvia or shed exoskeleton of a Cicada nymph.  The Cicada nymph lives underground for several years, and when it nears maturity, it digs to the surface and molts for the final time, flying off as a winged Cicada and leaving behind the shell of its formal self.

Thanks! The Cicada nymph had actually yet to break out of its exoskeleton yet when I found it. It was crawling along veeeeeery slowly. It must have been about to complete its molting process.
Best,
Brandon

Thanks for the clarification Brandon.  It appears in the image that there is a split down the back, which caused us to speculate that this was already an exuvia.