Subject: Praying Mantis Lifespan/Habitat/Laws
Location: Ashburn/Leesburg, Virginia – Willowsford Farm
December 7, 2012 3:03 pm
Hi there. Love your site!
Lots of friends and farm folks in the Maryland/Virginia region reported seeing more Praying Mantises during the 2012 growing season than in recent years – which sparked conversations about how long they can live and whether or not it is illegal to kill one. (Explored in one of our local blog posts after a mantis was carefully escorted from the Washington National’s field during a baseball game: http://compost2themoon.com/?p=2741 )
Wondering if you have any insight on either of those topics and/or ideas about why we all saw so many this year. And if you happen to have any suggestions about monitoring their egg sacks, that’d be great too. We discovered a couple on wooden tomato/pepper stakes in the field and set them aside in the barn. Are they better off outdoors in the elements?
Attaching a few of my favorite pictures of them from 2012 too.
Thanks and looking forward to using this site more!
Signature: Farmer Deb 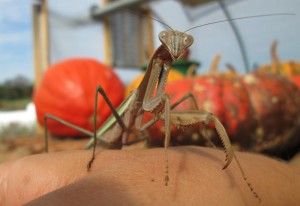 Hi Farmer Deb,
Just like other insects, and all other animals for that matter, when conditions including the weather and food supply are favorable, Mantis populations may spike.  They do not stay constant from year to year and this may have been an exceptional year for Mantids in your area.  Additionally, this is a Chinese Mantis, an introduced species.  According to BugGuide:  “Introduced as pest control and sold for that purpose. However Chinese mantis also eat the smaller native mantids. This has led to declines in population numbers of the native mantis species in some areas, but none of them are listed as threatened at this time.”  Since the ootheca of the Chinese Mantis are sold to control other insects and they are especially popular with organic gardeners, the populations of the Chinese Mantids gets human assistance which is not provided for native species which are not as economically viable as a means of biological control.  With regards to your specific questions, the life span of a Mantis is generally a single season, though a female may live longer in captivity where weather conditions do not have the same effect.  The ootheca are better left outdoors so that the indoor warmth does not cause the young to emerge too early.  We are not aware of any law protecting Mantids, though some local jurisdictions might have such laws.

Thanks so much for the response! I moved the ootheca outdoors and look forward to seeing which kind of mantids emerge in the spring (although I guess they will all be quite tiny and difficult to identify then). Maybe next fall I will see if one of the adults wants to live in captivity through the winter like that one on your website!
WR,
Deb

Another Male California Mantis at the porch light