Subject: Black Hairy Insect nesr White Pine Beetles
Location: California in Sequoia
March 19, 2017 6:43 am
Cannot identify the hairy black and white insect on this pine tree. The two pine beetles I could identify. This is taken at Wishon Camlground near Doyle Springs/Sequoia, in California.
Signature: Emily 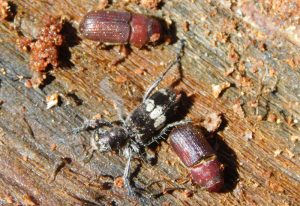 Dear Emily,
We believe your Pine Beetles are Red Turpentine Beetles, Dendroctonus valens, a species pictured on BugGuide and found in California.  According to BugGuide:  “Primary host: Pinus.”  Your unidentified beetle is a Checkered Beetle in the family Cleridae.  A similar looking species is the Red Bellied Clerid Beetle, Enoclerus sphegeus, which is pictured on BugGuide.  According to BugGuide, the species if found in California.  Of the Checkered Beetle family, BugGuide notes:  “predaceous on other insects, larvae mostly on wood- and cone-borers; some adults feed on pollen; a few species are scavengers” so it is possible that the Checkered Beetle you found was preying on the adults and larvae of the Red Turpentine Beetles.