Subject: Is this fly or bee dangerous to homeowner?
Location: South Eastern Massachusetts (Cape Cod)
August 12, 2012 5:28 pm
Hi guys!
This little fella is about 1/4 inch long and seems docile enough, but a client has several of them (she calls it an infestation – I counted six) in an enclosed entryway into her beachside, Cape Cod home. She thinks they are entering through the floorboards and that they burrow in the sand. I saw no evidence of burrowing. She is considering major renovations and other drastic measures. I would like to identify this insect, its food source and be able to tell her that tearing out the floor is not an answer and that they are not dangerous to humans. Can you help me out? Thanks again!
Signature: Tim Crowninshield 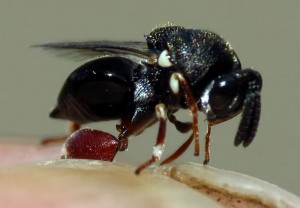 Dear Tim,
This is exactly the kind of letter we enjoy researching.  You have provided us with plenty of information as well as excellent photographs.  Additionally, you seem genuinely interested in learning about this creature to prevent its needless elimination.  We could tell immediately that your insect was a Chalcid Wasp, a group of parasitic hymenopterans, but we needed to identify it so that we could provide more specific information.  According to BugGuide‘s superfamily page on Chalcid Wasps:  “most parasitize eggs or immature stages of other insects or arachnids” and “Some are used to control insect pests (Lepidoptera, Diptera, Coleoptera, Hemiptera).”  We than found a matching photo on BugGuide identifying it as Brachymeria fonscolombei with the cryptic information:  “A whole group of these colorful chalcidids showed up in an office building. It turned out that a pigeon had died on the roof next to a ventilation duct. The larvae had crawled into the shaft to escape the summer heat and pupate.”  Intrigued we continued to research, but alas there was no helpful information on the species page, so we continued to search individual postings in the hope of learning more.  Another image on BugGuide provided this information:  “Emerged from a fly puparia.”  A third image on BugGuide contained this helpful bit of information:  “This species is a parasitoid of fly maggots. It can often be found hanging around road-kill.”  With all that information, we are now ready to pass on information for you to advise your client that this Chalcid is not harmful to her or her home.  It is actually a beneficial species that will help to control the fly population near her home.  If these Chalcids are actually emerging from the floor boards, it is possible that some animal died and rotted beneath the floor.  If she never noticed an odor, than it was most likely too small to be a problem during decomposition.  If Flies already found the rotting corpse, than the Chalcids have already done their job of consuming the maggots that would have eventually metamorphosed into adult flies.  The appearance of these Chalcids is most likely an indication that trying to remove the dead animal would not be necessary at this point as nature has already taken its course.  Again, we want to stress how much we enjoyed doing this particular bit of research. 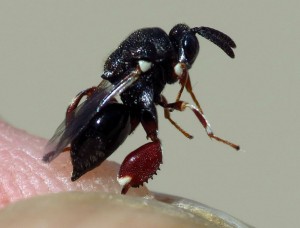