Subject: Unidentified bug in Mulu
Location: Mulu, Sarawak, Malaysia
November 8, 2014 10:24 am
We saw these bugs recently on a rock inside the Deer Cave in Mulu National Park in Sarawak and would be interested to know their name and a little about their lifecycle as the inside of the cave is pitch black.
Signature: John 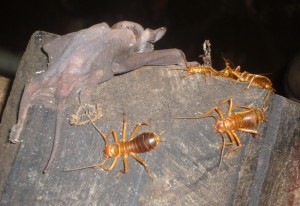 Our first thought was that these must be Orthopterans, members of the order that included Crickets and Grasshoppers, but a search brought us to a Flicker posting that identifies these unusual insects as Earwigs, Arixenia esau.  Paul Bertner who posted the image wrote:  “Found during a day walk in Deer cave, Mulu national park, HQ. Notice the reduced cerci, this is due to the earwig’s modified lifestyle in which it has given up its predatory role and instead lives epizootically; which is to say that it lives on or around another animal in either a mutualistic or parasitic relationship. Arixenia specifically feed on the body or glandular secretions of bats (usually Malaysian hairless bulldog bats) in the folds of skin or gular pouch. Unlike other genera of earwigs, some species of Arixenia are viviparous (give birth to live young).”  Images on Discover Life and Science Photo Library support the identification. 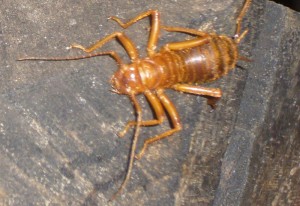 We believe the insects on the bat head are immature Earwigs. 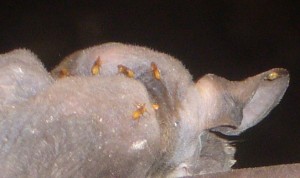 Dear Daniel
Many thanks for that information. I also thought that it may have been some kind of a cricket but I am very pleased to now be able to put a name to my photograph.
kind regards
John Medlock