Subject: Creepy beetle
Location: Sw Arizona- Sonoran desert
August 21, 2014 2:30 pm
Hi bugman,
I’ve seen these bugs in large groups in a snake trap. They have been seen eating caterpillars, and were found with a dead mouse. We are calling them creepy beetles that seem to be very aggressive and vicious.
Signature: Intern 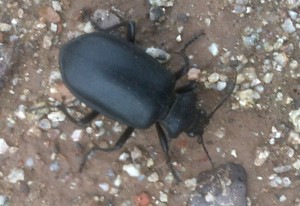 Dear Intern,
We have problems with the use of the term vicious to describe a predator that is capturing prey to eat.  This is a Caterpillar Hunter in the genus Calosoma, quite possibly Calosoma semilaeve, a species we featured numerous times in 2008 when we received numerous reports from Southern California, prompting us to name it as a secondary Bug of the Month for May 2008. We believe your Caterpillar Hunter may be Calosoma semilaeve, a species posted to BugGuide under the name Callisthenes semilaevis, indicating that it is in a subgenus.  Caterpillar Hunters are very effective predators that feed primarily on Caterpillars and other insects, so they are incredibly beneficial.  We imagine they might be opportunistic feeders that take advantage of dead animals like the mouse you found.  This species seems to experience years of few sightings, and then sudden population explosions, perhaps linked to years when desert caterpillars like the Whitelined Sphinx Caterpillars are also plentiful.

Hello and thank you for responding to our resourceful intern! I have worked here at Organ Pipe Cactus National Monument (Arizona) for over 25 years and have never seen anything like this. We do get “blooms” of insects and this is certainly one. We have abundant caterpillars, as we frequently do in summer, of Hyles lineata and so they are certainly plentiful. The beetles do seem at first to be a little “creepy” in their behavior but I would not call them vicious. So it goes.The odor is a bit much, but I have become accustomed to and now rather enjoy the odor of Pinacate beetles (Eleodes).
We have some really nice photos of other insects “in bloom” – mostly beetles and bugs – and would be happy to share if you like.
Again, thank you!
Charles Conner    Biological Sciences Technician

Hi Charles,
We would love to receive your other insect images.  Please use the standard form when submitting them.  Great World Cup image, but sadly, we won’t post images that we cannot get permission to include online.